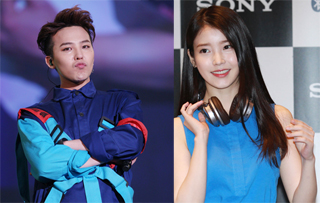 A number of renowned musicians, including G-Dragon, Taeyang and IU, have been confirmed to take part in a festival organized by MBC’s flagship program “Infinite Challenge.”
The shoot for the festival, one of the biggest events hosted by the variety program, began Thursday, according to Korean media outlet Star News.
This is the third time G-Dragon will participate in the festival, following appearances in 2011 and 2013. It will be the first time for Taeyang and IU, however.
Four-member rock band Hyukoh is also slated to take part in the program. The indie musicians are known for their individuality and musical prowess.
Other details regarding the line up so far have not been released.
“Infinite Challenge” first hosted the music festival in 2007, and since then has held the concert every two years.
During the event, each invited singer teams up with one of the program’s six stars to come up with a new song. The entire process ? from producing the material to the final performance ? is aired and usually takes about a month.