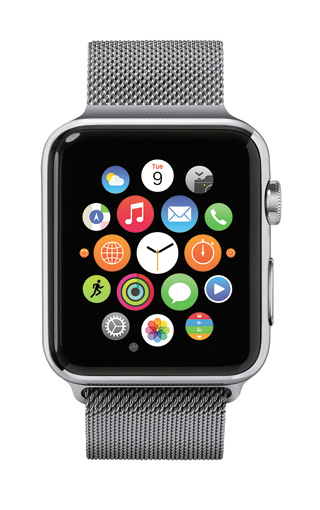 Just after dawn on Friday, an impatient-looking Lee Woo-min stood under his umbrella in the drizzle.

The 40-year-old was at the front of a line stretching 100 meters (328 feet) from the front of the Frisbee store in Myeong-dong, central Seoul. Lee had spent the last day trying to become one of the first persons in Korea to own an Apple Watch, and he was 30 minutes away from success.

“I came here at 5 this morning and I’m pretty excited to get Apple’s latest product,” Lee said.

He received a numbered ticket that Frisbee staff started distributing at 9:30 p.m. the night before.

Tickets are usually handed out the day of a product’s release, creating a campground of buyers outside the store.

This time, Frisbee decided to avoid that kind of crowd because of the Middle East respiratory syndrome (MERS) outbreak.

Some 300 people were in line when doors opened at 7 a.m., according to Frisbee.

The scene was similar at another Frisbee store in Gangnam District.

Apple mongers waiting in line even under the drizzling rain in front of Frisbee store in Myeong-dong, central Seoul, on Friday, for the purchase of the Apple Watch. [NEWSIS]

The first in line were two actors from Eastern Europe: Maxim, a 24-year-old from Ukraine, and his friend Irap from Belarus.

Maxim, who owns an iPhone 6 Plus, iPad and iPod, said he was 14th in line to purchase the latest iPhone in October.

“I’m so happy to be the first to buy the Apple Watch,” said Maxim, adding that he once owned a Samsung tablet which was too complicated for him to use.

“It was inconvenient,” he explained.

Apple also started selling its smartwatch Friday in Italy, Mexico, Singapore, Switzerland and Taiwan, two months after it debuted in the United States. 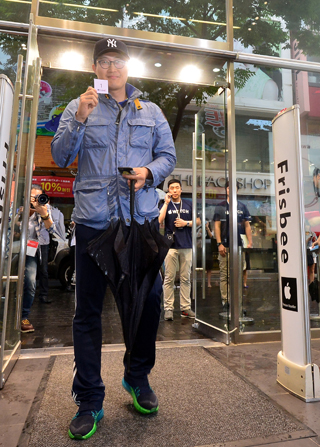 The Apple Watch’s arrival in the land of its archrival comes two years after Samsung Electronics started the global smartwatch race by introducing the Galaxy Gear at the IFA consumer electronics show in Berlin.

There has been much speculation in tech circles about how well Apple’s latest device will do in Korea.

Samsung is still the world’s No. 1 seller of smartwatches, with an estimated 71 percent share of the global market.

Of the nearly 800,000 smartwatches sold worldwide in the first quarter, 500,000 were made by Samsung, according to Strategy Analytics.

Last year, the company was estimated to have sold more than 1.2 million of its six models - Gear, Gear 2, Gear Neo, Gear Fit, Gear Live and Gear S, which was added to the lineup last year.

But Samsung’s dominance took a hit the first day the Apple Watch went on sale, with more than 1.5 million orders in the United States alone. 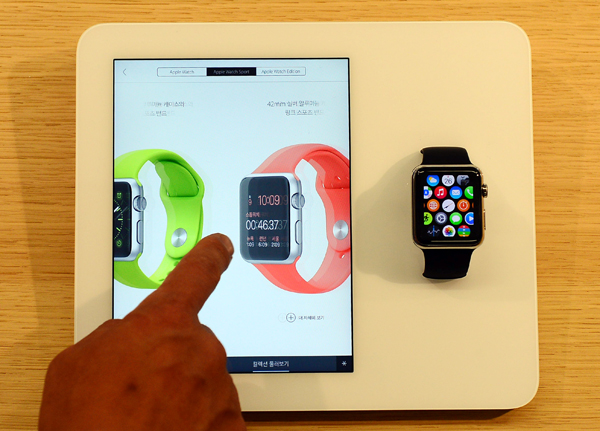 Display of Apple Watch at a Frisbee store. [NEWSIS]

Global Equities Research in a report released earlier this month estimated that within just two months of its release, by the end of this month Apple will have sold 7 million watches.

“Demand for the Apple Watch continues to get stronger,” said Trip Chowdhry of Global Equities Research in the report. “Worldwide Apple Watch orders stand at over 7 million units, of which Apple has now shipped about 2.5 million. Apple should easily ship more than 5 million Apple Watches by June 30.”

Strategy Analytics in March forecast that Apple by the end of the year will sell 15 million units worldwide and own nearly 55 percent of the smartwatch market share, supplanting Samsung.

Smartwatch competition was expected to spike this year with the entry from Cupertino, California-based Apple.

Strategy Analytics projects the smartwatch market will grow 511 percent this year, compared to 2014.

Meanwhile, Samsung isn’t sitting with its arms crossed watching Apple take over its No. 1 spot.

The Korean tech giant plans to unveil its new smartwatch, dubbed “Gear A,” along with the Galaxy Note 5 at the IFA in September.

The latest edition to its Gear series will have a distinctively unique design change compared with the earlier versions. Instead of the rectangular display, the Gear A is rumored to come with a circular display that is 42 millimeters (1.7 inches) across.

As for major changes in design, it is expected that the Gear A will not only have a crown-shaped power button on its face, but also a rotating bezel ring that allows users to change settings and shift menus, among other functions.