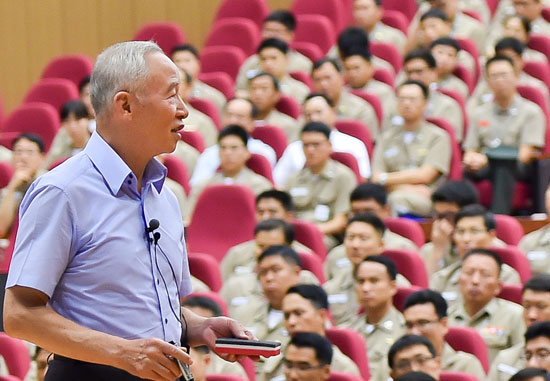 Nam Jae-joon, the former chief of the National Intelligence Service (NIS), hosts a lecture for Navy executives on Monday at Gyeryongdae. Provided by the Navy

The former director of the country’s top spy agency stood before a group of Korean military officials on Monday with the hopes of lifting their spirits, in the wake of a series of corruption scandals this year that have plagued the defense industry.

During his lecture, Nam Jae-joon, who previously headed the National Intelligence Service (NIS), said that during his 41-year military career, he was most concerned about himself, his subordinates and his children.

“I was always cautious about being caught up by private interests [or scandals],” he said at Gyeryongdae, where Korea’s Army, Navy and Air Force are headquartered in Gyeryong, South Chungcheong.

“Second, I was afraid for my men. I tried to reflect upon myself to determine whether I was an appropriate leader. And last, I was concerned for my children because I didn’t want them to be blamed for my actions,” he added.

Nam’s busy personal schedule initially made it difficult for the military to schedule a talk, but after two attempts, the Navy eventually succeeded in bringing him in.

Nam used a dry-erase board profusely to illustrate his points during his speech, titled “The Soldier’s Way.”

In line with the military’s aims to resurrect its public image following a series of defense procurement scandals over the past year, the Navy invited the Army veteran to address its officials, a request that had been left standing since April.

Nam served as the first NIS director for the Park Geun-hye administration, but was forced to step down in 2014 to take responsibility for two major controversies that undermined the spy agency’s reputation.

The NIS found itself in the midst of its worst crisis last year following its involvement in an online smear campaign against presidential opposition candidate Moon Jae-in in the run-up to the 2012 election.

It came under fire again earlier in 2014 after the prosecution revealed that its agents had intentionally doctored evidence in an appeals case against a Korean-Chinese man suspected of spying for Pyongyang.

But notably, when serving as the Army’s chief of staff, he did not use an official vehicle outside working hours. When he stepped down from the position, he also refused to go home in the vehicle customarily provided; instead, his wife picked him up.

During his lecture, he also stressed self-control, patriotism and courage.

“Military officers,” he said, “should always be able to respond to the question, ‘Will we promptly engage in warfare if the enemy crosses the border tonight?’ and know how to take action.”

Nam also touched upon his desire to be a good grandfather to his grandchildren.