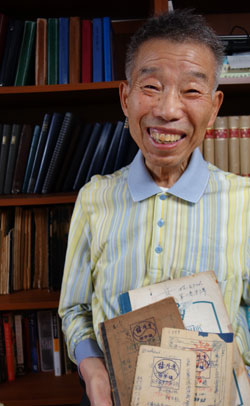 Ryu Wu-sik was attending middle school in Namwon, North Jeolla, when he decided to keep a journal documenting each day of his life.

The paper in his first journal, a small notebook, are now yellowed and a stamped image on the cover reads, “Traits of Life.”

Sixty-three years have passed since then, but the 77-year-old kept his word.

For more than six decades, he has recorded everyday life, a task that has taken up 116 volumes.

And those memories will now be permanently preserved in a local museum in Namwon.

From a historical perspective, the diaries serve as invaluable materials that reflect the daily lives of those in Ryu’s generation. He even attached transportation tickets and receipts in the notebooks, which he considered souvenirs worthy of holding on to.

“The diaries elaborate on an ordinary man’s life as he went through an era; it includes not only personal affairs with my family and friends, but also the changes in society,” Ryu said.

He added that keeping a journal has been significant for him: In writing down the stories from his daily life, those stories became a mirror to reflect him.

While working as a government employee, he added, writing in a journal also helped him stick to his goal of being honest. It even helped him be less touchy.

“This is my first journal this year. .?.?. I hope to live with a grateful heart and to be a generous father who is not hypocritical by realizing that I am not a perfect husband and father yet,” he wrote on Jan. 1, 2001.

Ryu noted that he felt a long time had passed since he read his old entries, many of which were written decades ago.

“I feel that my children have grown up and that the new generation is coming as mine is falling down,” he said.

“I was inspired when I realized that now I am protected by my children, because I always thought I protected them.”

The 77-year-old added that he hoped to be a small light in his children’s lives.

“Do you know how smart papers are?” he asked.

“Just keep a diary for a while. You will see some of the changes in your life.”