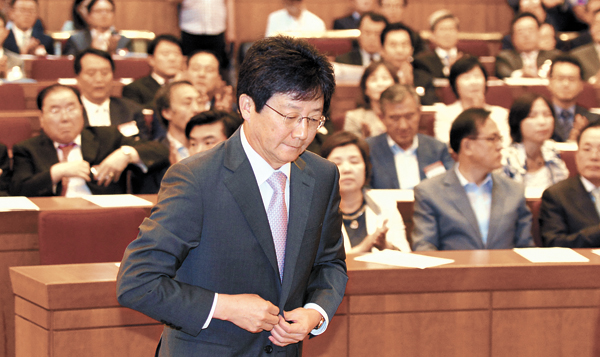 The relationship between the Blue House and the ruling party became even more tense on Friday, with President Park Geun-hye giving the cold shoulder to the Saenuri floor leader despite his attempts to offer an apology for having failed to properly assist her and mend political ruptures.

“I want to offer a heartfelt apology to President Park,” Rep. Yoo Seong-min said Friday during a party ceremony to appoint policy advisers. “The president is devoted to leading state affairs, but the ruling party has failed to properly support her, and I owe her an apology.”

Expressing her frustration for Yoo for having engaged in political bargains with the main opposition, President Park on Thursday vetoed a revision to the National Assembly Act, which strengthened lawmakers’ authority to demand changes in administrative legislation.

The ruling party supported the bill in order to secure the passage of another piece of legislation to overhaul the money-losing civil service pension system, a key project pushed by the president.

Criticizing the practice of political bargaining, Park rebuked the Saenuri, pressuring Yoo to step down for his “politics of betrayal.”

Following her remarks, some Park loyalists inside the Saenuri Party demanded that Yoo step down, but the floor leader has made clear that he will continue with his job. On Thursday evening, Yoo promised to try to mend ruptures with the president as Saenuri Chairman Kim Moo-sung said the floor leader should apologize, hinting that the party will keep him as the floor leader.

Yoo didn’t waste time and issued the apology on Friday morning. He prepared a statement and read it at the party event, attended by several hundred people. His voice trembled as he spoke. “I once again tell President Park that I am sorry,” Yoo said. “I hope she will assuage her anger toward us and open up her heart again.”

The apology had no effect.

While Park remained tight-lipped, her presidential aides said Friday that it would be impossible for the ruling party to restore its relationship with the Blue House without replacing its floor leader.

“When the president exercised her veto, she questioned if Yoo had performed his job properly,” a presidential aide told the JoongAng Ilbo. “Yoo must assume responsibility.”

“Yoo said Park should ‘assuage her anger,’ but the president issued the criticism not because she is angry,” the source said. “She stands adamantly against politicians who betray her trust. Yoo seems to have a naive understanding about the situation.”

Another presidential aide said it will be difficult for the Blue House and the government to consult with the ruling party unless Yoo steps down.

Park loyalists inside the ruling party threatened that the president may abandon the party if Yoo resists.

Yoo was elected as the Saenuri Party’s floor leader in February based on his pledge that he would put the party back at the center of decision-making with the Blue House.

Once a devoted Park loyalist, Yoo served as her chief of staff in 2005 when she was the chairwoman of the Grand National Party, the predecessor to the Saenuri Party. However, the two became estranged after he expressed his disagreement with her plans to overhaul the conservative party in 2012. He also did not actively participate in her presidential campaign.

“Park is known for demanding absolute allegiance from her supporters, while Yoo is known for his courage in speaking up for his own opinions,” an official from the ruling party said. “That ruptured their relationship.”

The main opposition New Politics Alliance for Democracy (NPAD) condemned Park for her way of doing business with the National Assembly. When Park issued her criticism Thursday, she not only rebuked the ruling party’s floor leader for his negotiation skills, but also attacked all lawmakers for only going after votes and their own interests, while urging voters to judge them in the elections.

On Friday, Moon Jae-in, the NPAD chairman, held a press conference in which he appealed to the nation to join in the party’s efforts to judge the president. A group of 75 lawmakers and party officials stood behind him as he read the statement.

“Her veto was intended to blame the legislature for the administration’s incompetence and it was a political stunt to turn public criticism on the government’s failed response to the outbreak of the Middle East respiratory syndrome,” Moon said, adding that the government’s mishandling of the disease had caused the loss of precious lives, which was cause in itself for the president to apologize.

“The National Assembly already approved 21 bills intended to boost the economy, but the president is blaming the legislature that the economic crisis is not resolved because the lawmakers do not pass her bills,” Moon continued. “That is a horrible lie.”

The situation also grew more complex for the Saenuri Party after National Assembly Speaker Chung Ui-hwa stated that he would arrange a vote to override Park’s veto.