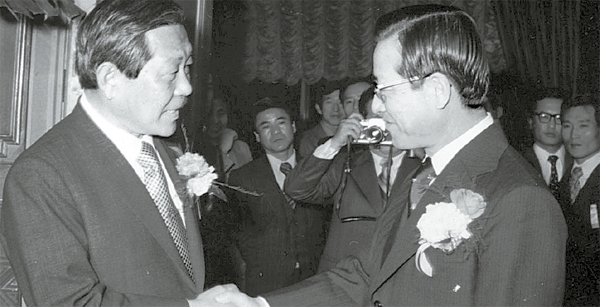 Prime Minister Kim Jong-pil greets Kim Sung-kon, the president of the Korea Chamber of Commerce and Industry, at a New Year’s ceremony in January 1974 at an unspecified location. [JoongAng Photo]

[Kim Jong-pil remembers: 40] This is the latest in a series of articles on the life and times of Kim Jong-pil, a two-time prime minister, based on extensive interviews with the 89-year-old.

Kim Sung-kon, Baek Nam-uck, Gil Jae-ho and Kim Jin-man were confident in their political power after they succeeded in amending the Constitution in 1969 to allow President Park Chung Hee to seek a third term.

But there was one incident that was powerful enough to fracture their power, which doomed them in politics. Their overt disobedience - Kim Sung-kon was particularly defiant - on Oct. 2, 1971, made President Park bristle. As a result, their four-man circle, the core of which was known as the TK Group, was dissolved.

[In Korean politics, TK refers to the first letter of Taegu, the old name for Daegu, and Kyongbuk for North Gyeongsang]. 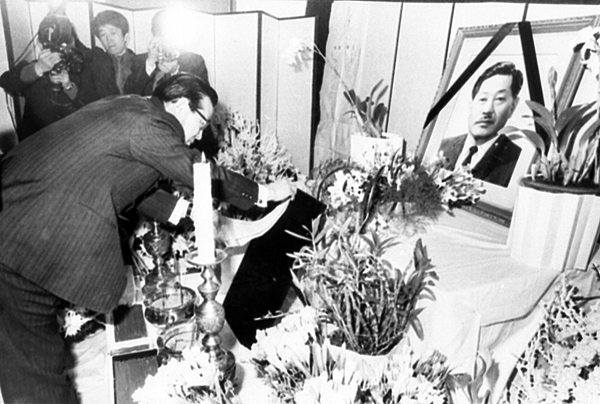 Prime Minister Kim Jong-pil pays his respects at the mourning altar set up for Kim Sung-kon on Feb. 26, 1975. Provided by Kim Jong-pil

Given that the ruling Democratic Republican Party (DRP) held a majority, with 113 seats in the 204-member National Assembly, it appeared the motion would most certainly be dropped. But the situation took an unexpected turn.

Internal Affairs Minister Oh, a military academy graduate, was handpicked by President Park for the job. But Oh did not get along with Kim Sung-kon, the de facto leader of the TK Group, whose members included those from Daegu and the surrounding areas in North Gyeongsang.

Kim would sometimes go to the Blue House to brief President Park on intelligence reports gathered by the police. On those reports, Park would ask Oh about details, some of which he hadn’t even known. Kim had given money to senior police officials in each province in exchange for receiving this information.

The situation enraged Oh, and he would complain about Kim every time he met with me.

“The police - who should follow my guidelines as internal affairs minister - are following Kim instead for the money!” he would say. As prime minister, I told him to find subtle ways to pressure Kim to stop him from trying to influence other officials.

But I couldn’t persuade him; he told me he would tackle the issue head on. So in August 1971, Oh dismissed a senior line of police officials suspected to have close ties with Kim, and those in the police department who were close to that core circle were all dismissed.

Subsequently, Kim and the members of his faction colluded to oust Oh from his position. Kim had certain opposition party members - those who were already closely aligned with him thanks to his monetary handouts - submit a motion to dismiss the internal affairs minister.

Sensing that ruling party members may join Kim’s campaign to drive Oh out, President Park called in Baek Nam-uck, who was the chairman of the DRP, and told him to stop party lawmakers from approving of the motion.

When the motion was submitted on Sept. 30, I paid a visit to Kim’s house and had a drink with him. “If you oust Oh, it will be seen as a slap in Park’s face,” I told him. “I think you want to show him how influential and powerful you have become. But that’s nonsense. Do you not know yet how frightening he could become? You will be hurt no matter what.”

But Kim couldn’t be swayed. “Oh has always looked down on me,” he said. “He thinks he’s better than me just because he’s in a ministerial position. I’ve already made my decision. There’s no turning back. … I’m only challenging Oh, not President Park.”

He seemed confident that President Park wouldn’t discard him due to his wealth, which he must have thought the ruling DRP badly needed.

On Oct. 2, a vote on whether to pass or discard the motion was held at the National Assembly. And despite my efforts, the dismissal was approved 107-90, with six invalid votes.

Assuming his political authority was secure, Kim headed to a golf course with a few lawmakers under his influence. Knowing President Park would be outraged, I headed to the Blue House to brief him on the votes.

“Are they disobeying me now?” he shouted. “Call in the director of the intelligence agency right now!”

Park gave the order to arrest Kim and his confidants and question them on their insubordination. The director was visibly shaken and could only murmur, “Yes, sir.”

Kim Sung-kon, Gil Jae-ho and other lawmakers close to Kim were all taken to the headquarters of the Korean Central Intelligence Agency. Aware of President Park’s temper, the intelligence agents were reported to have physically abused them to some extent, going so far as to pull out Kim’s mustache.

Kim and Gil were left with no choice but to leave the party, which by law meant they would automatically lose their parliamentary seats.

I reunited with Kim when I went to the United States in January 1973 to attend the funeral ceremony for former President Harry S. Truman. Kim had moved to Boston after his ouster from politics. I told him during the meeting, “Forget the past. You brought it upon yourself.”

He agreed, admitting that he had done a stupid thing and was sorry for what had happened.

I asked him if there was anything I could do for him. He replied, “I would do whatever is asked of me in Korea.”

I called President Park that same night and asked him to give Kim a position he thought was befitting.

“Kim told me he would always be loyal to you now.”

A few days later, President Park called me and said he could appoint Kim as the head of the Korea Chamber of Commerce and Industry. “Ask Sung-kon if he would like to take it,” he said.

He returned to Korea and took up the post in September 1973. However, he abruptly passed away in February 1975 from a stroke at the age of 62. His death came as a shock, which no one had foreseen. I paid a visit to his memorial altar and posthumously awarded him a presidential medal to praise his dedication to the country.

As I placed the medal in front of his portrait, I felt the vanity in a life spent. Just days before his death, I had asked him why he had attempted to amass political strength and challenge President Park.

“I never thought about taking power as president,” he acknowledged. “But I did wish to become prime minister in the parliamentary government system. I thought I might be able to pull that off if I bought the support of lawmakers across party lines. But now, it’s all a matter of the past. I’ve realized now it was a dream in vain.”