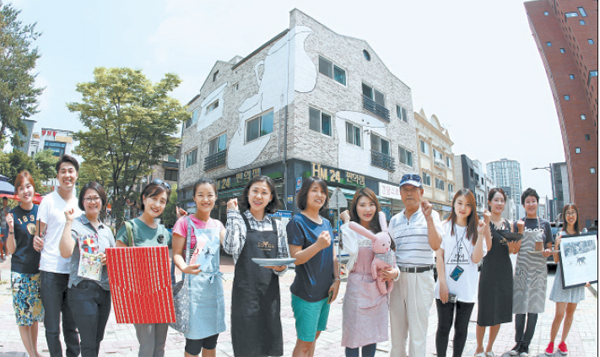 The artists of Pangyo 25-tong and area residents stand in front of a building worth 2.5 billion won, which was recently painted with a mural. By Kim Seong-ryong

At the beginning of April, Lee Jung-ha, the owner of a building in Pangyo-dong, Bundang District, in Seongnam, Gyeonggi, was approached by a stranger who offered to draw a mural on the brand new structure.

Lee immediately disapproved of the artist, ponytailed and wearing suspenders, and he also wasn’t impressed by the man’s offer. He further wondered why someone would want to paint a mural on a new 2.5 billion won ($2.3 million) three-story building.

He declined, and 42-year-old artist Han Seok-hyeon stepped back.

But just when Lee thought the issue had been settled, Kim Jong-seon, 77, the president of the neighborhood’s association for senior citizens and the owner of another building in town, brought it up again.

“Your building is at the entrance of town,” he said. “If [the artist] draw[s] a mural, [the building] will become a landmark. You saw how business improved last year during the neighborhood’s arts and culture festival.”

“I didn’t even like how the artist looked,” Lee admitted.

But after a month of constant persuasion, Lee eventually obliged, and the mural was completed on April 30.

Lee’s building is one of 160 half-commercial, half-residential buildings on a street block called Pangyo 25-tong that has turned an eye toward local art and culture to profit.

The main street of Pangyo 25-tong was developed in 2010, and most of the buildings in this area, located in the middle of an apartment complex, hosts stores on the ground level, offering residential spaces upstairs.

But because these buildings are only half commercial, the block has trailed behind fully commercial business districts. As a result, rent is comparatively cheap, which has allowed artists to open workshops in the neighborhood.

Artists with workshops and studios in the area have also increased business in the area, allowing owners of resident buildings to raise rents.

So far, the effort to draw visitors via arts and culture appears to be working.

In 2012, artists in Pangyo 25-tong began a free youth education program, offering classes in a variety of disciplines, including photography, crafts and drum performance.

“Truthfully, the aim to publicize the artist workshop village in Pangyo 25-tong for business was greater than the goal of contributing to the community,” a resident artist said.

Still, word spread. The number of customers increased, and the expansion of 40 creative spaces for culture and arts followed.

Due to their initial success, the artist collective started another project: the Pangyo 25-tong Street Festival, which required the consent of area residents. Roads had to be blocked off to create pedestrian zones, and building owners needed to make their restrooms public for visitors.

The street would have to be publicized so empty stores could be occupied and rents could go up, the artists said. Local residents agreed to participate, and the artists invited neighborhood children participating in the free arts education program to perform and display their work at the event.

In addition to the street festival, the neighborhood also began running a monthly arts market last year, held on the second Saturday of each month.

Now, after initially rejecting the idea for a mural on his building, Lee said he couldn’t be happier.

“Maybe it’s because the neighborhood has become famous,” he said, “but there have been a lot more people using our convenience store on the first floor of the building as a meeting place.”

As business improves, the artists, building owners and residents of Pangyo 25-tong have vowed against an abrupt increase in rental prices.

“If the price of rent suddenly increases, the artists will leave and large corporate franchises will enter the area instead, making this space no different from any other,” Kim said. “Pangyo 25-tong has to set itself apart through arts and culture in order to find its niche in the business world and attract visitors.”