The recent cases of professional athletes taking banned substances shows Korea is no longer immune to doping, and calls for local sports’ governing bodies to increase penalties are on the rise.

This month alone, three professional athletes were caught doping and each violator said they didn’t know the drug that they were using contained banned substances.

On Thursday, the Korea Baseball Organization (KBO) announced that Hanwha Eagles outfielder Choi Jin-haeng will be suspended for 30 games after testing positive for stanozolol, a synthetic anabolic steroid.

In his disciplinary committee hearing, Choi said he took a protein supplement given by one of his acquaintances but didn’t know it included a banned substance. 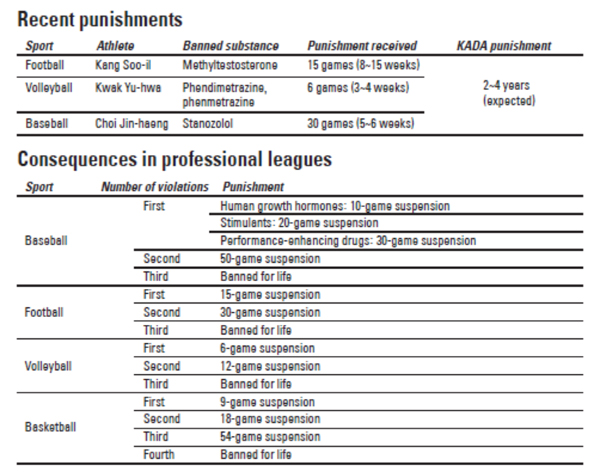 The 21-year-old first testified she consumed traditional medicines provided by her mother. She later said she’d actually taken a weight-loss supplement after the Association of Korean Medicine threatened to sue her, claiming banned substances are not used in traditional medicine.

Jeju United forward Kang Soo-il tested positive for methyltestosterone, a type of anabolic androgenic steroid (AAS), and was dropped from the national team squad earlier this month. Kang explained that he used a mustache-growing cream. He received a 15-game ban last Monday.

However, these violators may be lucky compare to others.

For example, swimmer Park Tae-hwan is currently serving an 18-month ban from FINA, the international swimming governing body, after testing positive for synthetic testosterone, an AAS prohibited by the World Anti-Doping Agency.

Under Korea Anti-Doping Agency (KADA) regulations, all could have received at least a year-long suspension, even if their doping was accidental.

But the KADA regulations are currently only applied to athletes competing in non-professional leagues. Each pro sport governing body has its own rules and punishments that aren’t as strict as KADA.

The KBO increased its punishments for doping in April, but they still aren’t considered very strict. Previously, first-time offenders were suspended for 10 games. Now, depending on the type of illegal substance, first time violators are punished for 10 to 30 games. The punishment for second-time violators is a 50-game suspension, up from 30, while third-time violators are banned for life as before.

But the KBO’s penalties are stricter than in other pro sports. The Korean Basketball League (KBL) suspends first-time violators for nine games, or three weeks considering each team plays about three times a week. KBL players are only banned for life after their fourth violation.

Currently, sports governing bodies and each team conduct doping education programs. Some even partner with hospitals to make a list of banned substances, but since there are too many drugs, experts say one or two classes are insufficient.

“These recent cases show that we need to have a proper system that reinforces doping education,” said Lee Dae-taek, a Kookmin University professor of physical education. “In order for Korean athletes to be respected in the international sports world, we should also increase the punishment for doping.”

In April, the National Assembly passed a law mandating doping tests administered to professional athletes follow KADA’s process, which is stricter and less predictable than those of professional leagues. It will go into effect this November.