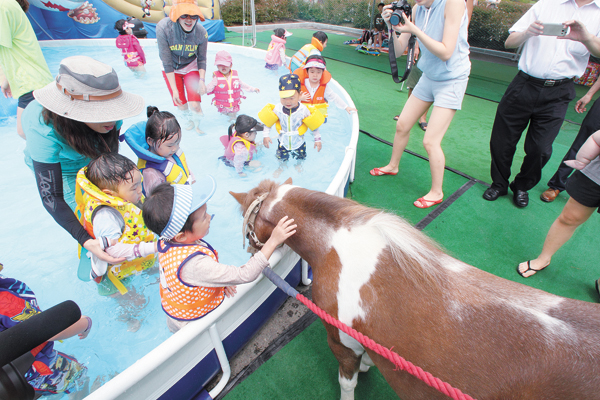 Children at Let’s Run Park Busan-Gyeongnam plays with a horse while swimming at the pool. Provided by Korea Racing Association

Lim Jung-soo, 41-year-old office worker in Busan, visits a horse racing park two or three times a month with his wife and two daughters. He came at first because his daughters wanted to see horses after reading about them in a book. Now, the place has become their family’s go-to spot for weekend picnics.

“There are not many opportunities to see and ride horses, and I just enjoy seeing my daughters smile whenever they go to the park,” he said.

In Korea, the horse racing parks used to have a negative connotation as just a place to gamble on the races. But these days, they have come to resemble amusement parks offering entertainment for the whole family.

The park opened in September 2005, on 378,000 square meters (93 acres) of land between Beombang-dong, Busan and Jangyu-myeong, Gimhae, South Gyeongsang.

In order to escape the negative association with gambling, the parks now focus on providing family-friendly entertainment, according to Kim Byeong-jin who heads Let’s Run Park Busan-Gyeongnam. Its main competitor is now amusement park Everland in Yongin, Gyeonggi.

“In the past, the horse racing park was a place where people would just bet on races, but now it has become a place for leisure,” said Kim.

“We provide services like any other amusement park in the world.”

Let’s Run Park Busan-Gyeongnam offers horse-themed attractions like horseback riding and a horse culture museum, but there is also a botanical garden, concert hall and sledding field that becomes a water park in the summer.

Last year, the number of visitors slipped to 1.02 million, but park officials said they are working to attract more people.

“For this winter, we are planning a light festival,” said Kang Hyun-soo, the director of customer service at Let’s Run Park Busan-Gyeongnam.

The Seoul branch, which sees around 3.2 million annual visitors, will open a new theme park next May, while Jeju is reinforcing its horse-themed offerings.

The KRA said that it also plans to build a fourth Let’s Run Park in Yeongcheon, North Gyeongsang to bring more tourists to the region.

“Let’s Run Park Yeongcheon will become a new model that grows together with the region and serves as an opportunity to upgrade the nation’s horse racing culture,” said KRA marketing chief Huh Tae-yoon.