Ryu shows new, darker side in ‘The Piper’

Ryu shows new, darker side in ‘The Piper’ 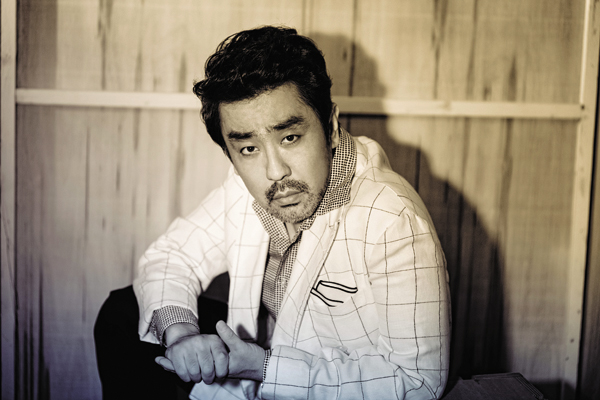 Actor Ryu Seung-ryong will return to the big screen with his new horror-fantasy flick, “The Piper.” Provided by Studio 706

Veteran actor Ryu Seung-ryong has always been known for his deep voice and friendly demeanor, and in recent months has been seen as something of a goofball with his appearances in ads for popular mobile food delivery app Baemin.

But the actor is set to show off a new side of himself in the upcoming horror-fantasy film “The Piper,” scheduled for release July 9.

Set in the 1950s, the film centers on a street musician named Woo-ryong (Ryu) trying desperately to save his sick son. The musician accidentally comes to a mystery town not marked on any map. Usually bright and optimistic, Woo-ryong finds his personality starting to change the longer he sticks around.

The upcoming flick is Ryu’s first work since “Roaring Currents” (2014), where he played the main role of a Japanese mercenary soldier. Ahead of his new film’s release, the actor sat down with the JoongAng Ilbo, an affiliate of the Korea JoongAng Daily. 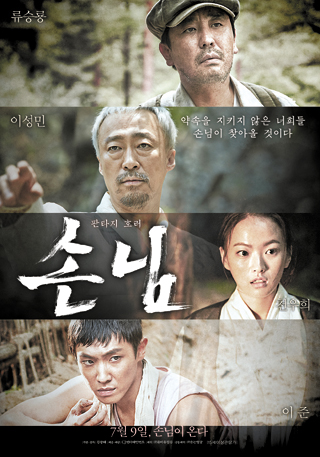 The official poster of the film “The Piper.”

Q. How is the character Woo-ryong described in the film?

A. The character is pretty complex. In fact, the director requested me to gain some weight for the role because Woo-ryong is the kind of optimistic person who can put on weight even during the [Korean] war. If he had not accidentally entered the town, he would have continued his simple life until his death. After encountering various unexpected events, however, Woo-ryong ’s simple-minded personality gradually changes. As the character shows, individuals can never find out what kind of person they are and how they will change unless they experience [things that challenge them].

Can there be various interpretations of the movie?

The story is like a treasure hunt. In the flick, there are many metaphors and symbols for the audience to piece together.

I know the first part of the story is very similar to the crime movie “Moss” (2010). However, I was deeply intrigued by the unusual and surprising plot that followed. After reading the script, I asked the director about the core message he wanted to deliver through the film, and his answer matched my expectation. As soon as I heard the answer, I said I would do the film.

What was the answer?

It was something about a promise. I can’t reveal any specifics because I’m afraid of spoiling the film.

How much did you practice to play Woo-ryong?

Since Woo-ryong is a piper, I played the pipe until people around me got sick of the sound. It took me quite a long time to memorize all the scales and produce the sound of the Irish pipe naturally. When I practiced, I turned on music to imitate and play along with. I practiced and practiced like a fool. I felt electrified when one day a staff member told me that the music I played sounded like the record I had been trying to emulate.

I heard you worked mostly outdoors in Pyeongchang, Gangwon, for four months while shooting ‘The Piper’

I usually feel really stressed and anxious when I shoot a film. This time, however, I felt stable thanks to the beauty of the nature I could see [while shooting outside].

I really like nature. While filming the movie, I shook all the pressure off by digging up various herbs and edible plants along with seniors from the village. Also, sitting on the porch and having conversation with people was also very relaxing for me.

Are you a sensitive person?

Yes, I’m very sensitive. Just like many actors, I also get deeply attached to the character I play. The most stressful time for me is right before the first shoot. Once I complete the filming, I attempt to relax and free myself from the character as soon as possible.

After you finished shooting this movie, which part of Woo-ryong lingered on you the most?

It was the feeling that I had towards the son. I couldn’t shake it off for the longest time.

The son portrayed in the movie is only one year older than your real son.

He seemed like a real son to me. However, since he is an actor, he is very professional. The child has good senses and memorizes his lines very quickly. Whenever I take on the role of a father, I see myself comparing my real children with those young actors and actresses, which makes me worry about my children’s future.

Since you are a highly renowned actor, you must be invited to take part in many different types of movies. When selecting a movie to star in, what is most important to you?

For me, it’s most important that I feel inspired after reading the script.

Since I like acting, I found myself playing leading roles. Later on, I also found myself modeling for various ads. I think everything came naturally step by step.

Many people perceive you as a bright, funny person. Is that who you are in real life, or is there a big difference between that perception and your true character?

My life philosophy is to have fun and enjoy the intense competition. However, since acting is emotionally exhausting, I tend to be a little dark when I’m alone. Some celebrities may be used to receiving people’s attention since they were in their 20’s. For me, however, I lived a comparatively free life until I was 40. But everything, including my environment and people’s perception of me, suddenly changed when I started getting the spotlight.

At first, everything was confusing for me due to the sudden change. Along with the fame, I also found it hard when people told me I’d changed [after becoming famous] even though I hadn’t.

But, once I realized that I’m slowly walking along the road of my acting career, I felt a lot more at ease.

My final goal isn’t becoming the best actor. I just want to carry on pursuing my career as an actor. I don’t know where my final destination will be and it would be arrogant for me to speculate.

What promise can you make to your audience?

Some people may feel my acting is a little lacking. However, to be honest, that is my limit. If I’m told to repeat all the roles I’ve done so far, I wouldn’t be able to do it.

What I’m trying to say is that I have always put forward my best effort in the roles I was given. I can promise my audience I won’t lie when acting, that I’ll select fine works and gradually become a better actor. I think this is the least I can do to pay back all the love I’m given [by fans].