Galaxy Grand Max is a hit because of its price

Galaxy Grand Max is a hit because of its price 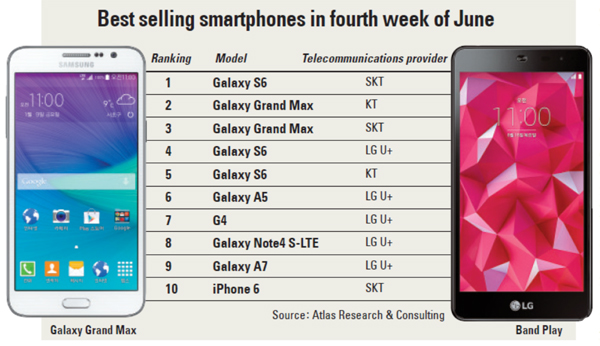 Smartphone makers rely on their flagship models, with the latest features and highest prices, to be their biggest sellers.

When Samsung’s much-anticipated Galaxy S6 series came out on April 10, many expected it to be the brand’s top-selling phone for months.

But in the first week of May, the Galaxy Grand Max, a budget phone released in January, outsold Samsung’s Galaxy S6, according to market research firm Atlas Research & Consulting.

Korean consumers are starting to go for low-priced budget phones, especially following a regulation last year that limited subsidies telecom companies can offer on new phone purchases. At the same time, phones that sell in the 100,000 won ($89.10) to 500,000 won range are no longer simple, minimal-function gadgets. Budget phones from Samsung, LG, Microsoft and Lenovo now come with decent processors and cameras that stand up to the higher-priced competition, but they do not break the bank.

Whenever she changed her phone, she bought the top-of-the-line model.

But she changed her attitude after she was unable to benefit from hefty subsides following the Mobile Device Distribution Improvement Act.

Before the regulation, the prices of flagship smartphones were often lowered to the 300,000 won range, though the release price hovered from 800,000 won to 900,000 won.

“It was almost twice as expensive compared to when I bought a Galaxy S4 two years ago,” she said. “Telecom companies asked for 700,000 won in early May for a Galaxy S6 Edge, which I think is not affordable.”

She turned to budget phones.

“I realized that I only use a set of functions on smartphones, such as instant mobile messengers, the camera and web browsing,” she said. “I don’t usually play games or watch videos on my phone, so I don’t need a super quality processor or large storage.”

She finally decided on a Samsung Galaxy A7 for 290,000 won last month and is satisfied with the handset.

The latest sales figures testify to the popularity of cheaper phones.

Four out of the top ten-selling phones in the fourth week this month are budget phones, according to data compiled by Atlas, although the Galaxy S6 regained its top position. The listed mid-range phones include Galaxy Grand Max, Galaxy A5 and A7.

Smartphone makers such as Lenovo, Xiaomi and Motorola and tech giants Google and Microsoft have all
launched affordable smartphones this year with advanced cameras and high resolution displays. Korean users tend to stay with local brands such as Samsung and LG due to concerns about after-sales service.

“In emerging economies such as India and Indonesia, the demand for medium or low range smartphones has been huge,” he said, “But in Korea, such budget phones were slow in picking up.”

“But since the subsidy regulation last October, more and more consumers are looking at cheaper smartphones.”

Samsung Electronics announced a trio of budget smartphones - the Grand Max, A5 and A7 - in January. Local rival LG is eager to take some market share by launching smartphones at competitive prices.

Its latest push is the LG Band Play smartphone, which is characterized by an improved camera and audio system.

The model has a 13-megapixel main camera, which is impressive since many budget phones still have cameras of less than 10 megapixels.

Samsung’s latest mid-range phones A5 and A7 also have cameras with the same specifications.

Analysts believe that the focus on camera features is aimed at attracting younger users.

“The camera is one of the features young people use most,” said Zhang from Atlas.

“Before, budget phones had very basic functions such as phone calling and Internet connectivity,” he said, “But to widen the consumer base, the companies started revamping features that young consumers care about.”

“We don’t now specifically target a consumer base when we launch cheaper phones,” said Lee Won-ho, a public relations worker at Samsung Electronics. “The best way to attract consumers is to pull off great functions at cheaper prices.”

The popularity of cheaper phones coincides with a growing demand for so-called thrift phones that borrow Internet connectivity from major carriers.

According to the Ministry of Science, ICT and Future Planning, the number of thrift phone subscribers surpassed the 5 million mark in April, with its market share hitting a new high of 8.8 percent.

“As the smartphone market has matured,” Zhang said, “users are no longer simply attracted by a brand name.”