In corner office, an agent of change

In corner office, an agent of change 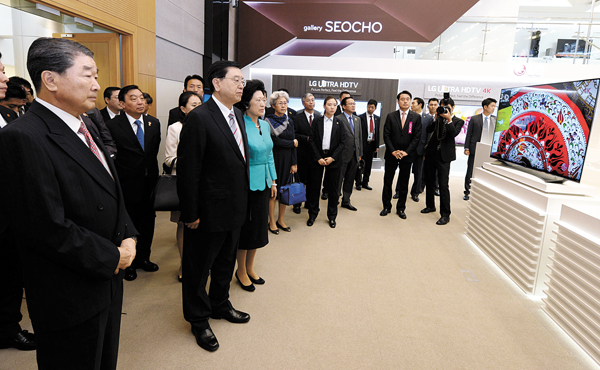 With a range of new technologies integrated in areas such as Big Data and the Internet of Things, injecting novel, disruptive ideas into products has become critical in the tech industry.

LG Electronics’ emphasis on creativity and employee engagement is one way to accomplish that.

Over the past three years, CEO Koo Bon-joon has stressed the importance of new ideas in order to remain competitive.

“We need to produce products based on new thinking, so that we can be prepared for the future,” Koo said in his New Year’s statement. “To this end, We need to pull together resources to create differentiated values. Therefore, we could find future growth engines.”

When he came to LG Electronics in 2010, he focused on the fundamentals.

“[LG Electronics] has veered away from the basics,” Koo told reporters at the Consumer Electronics Show in Las Vegas in 2011.

At the time, he identified the basics as research and development, production and quality.

He made it clear he wanted to change LG’s corporate culture from one that has been considered soft to a more rigid and aggressive style.

The reasoning is that such a strong corporate culture would help LG weather tough conditions.

The year Koo took the top position saw record operating losses in the second half as the company swung into the red for the first time.

Koo’s approach was in contrast to that of his predecessor, Nam Yong, who placed much of his focus on marketing and globalization. Nam’s management style was characterized by cutting production costs, rather than long-term investment in product development.

But his focus began changing in 2013.

“We’ve established our position as a major tech company, thanks to sufficient investment,” said the CEO at a board meeting in 2013. “We now have to add game-changing creativity to existing information and technology that we are already strong on in order to become the top player in the market.”

Since then, the company has actively ventured into emerging business segments. In 2013, LG Electronics announced it would enter the vehicle components industry.

The tech powerhouse in 2014 said it would jointly develop parts for driverless vehicle systems with German automaker Mercedes-Benz.

Under the partnership, the companies are developing a Stereo Camera System, which is a key component of driverless cars. The system is designed to detect traffic problems in front of a vehicle and collect traffic information in real time.

The new business division has turned in better than expected performance as the company posted 382.6 billion won ($340 million) in sales of vehicle components, beating market estimates.

Koo Bon-joon was born in 1951. He earned a Bachelor of Science degree in computer science and statistics from Seoul National University in 1978 and an MBA from the University of Chicago in the early 1980s.