Koreans tie the knot but won’t sign the papers

Koreans tie the knot but won’t sign the papers 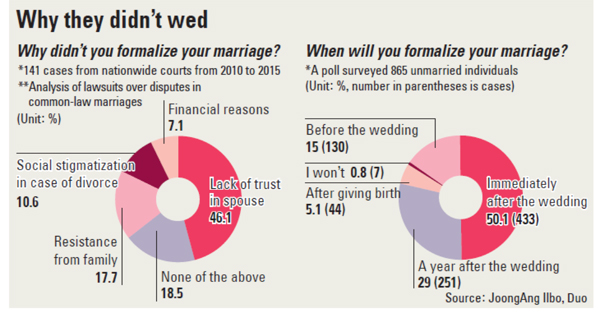 After dating her college sweetheart for more than a decade, a 34-year-old office worker thought it was time to finally tie the knot. The couple held a wedding ceremony in late 2013, but the bride, who asked not to be named for this article, was far from satisfied.

Her husband was reluctant to make their marriage official by registering it at the local district office.

Distressed by her husband’s lack of initiative, the 34-year-old did the paperwork on her own to register their marriage in the district, even forging her husband’s seal. His reaction took her totally by surprise: He walked out and filed a lawsuit to end the marriage.

His reasoning was merciless.

“I felt obligated to marry her due to the amount of time we spent dating,” the husband said. “But I wasn’t sure enough about the relationship to sign off the papers.”

In a recent survey conducted by the JoongAng Ilbo and Duo, the country’s top matchmaking agency, more than three out of 10 unmarried individuals - 302 out of a pool of 865 respondents, or 34.9 percent - said they would take time before making their marriage legally binding. As to when they intend to do the paperwork, 251 people answered a year after cohabitation, the most popular answer at 29 percent. That was followed by 44 people, 5.1 percent, who said they would register after having their first child.

When asked about their reasoning, over half (51.3 percent) replied they were “uncertain” about their potential spouse, whereas 15.2 percent cited “freedom.”

The results show that common-law marriage, which was rare in the past, has become more widespread among the young generation in Korea, said Kim Hyun-jin, a lawyer at the law firm Shin and Kim.

Im Chae-woong, another lawyer at Bae, Kim and Lee, attributed the fad to the fear of divorce.

“Couples who rush to marry without spending enough time to know each other, or without resolving certain issues, tend to suspend the registration procedure because they’re anxious about ending up getting divorced,” said Im.

Divorce, which remains a kind of taboo in Korea, is what makes them so jittery about taking that last step, continued Im. Of the 141 lawsuits filed with the country’s legal authority since 2010 involving disputes in common-law marriages, 40.4 percent was related to couples that were married for less than a year. Almost half of the people in those cases, 46.1 percent, said they had not legalized their marriages due to a “lack of trust” in their significant others.

A separate set of data indicates that separated couples whose marriages were not legally binding stayed together for an average 5.29 years. People who divorce after legally marrying stay together on average 14.3 years.

Korea recognizes common-law marriage in three main conditions: when the couple has lived together for a certain period of time, when they have publicized their marriage, and when they held a wedding.

In response to the changing demographics, Lee Hyun-ju, a matchmaker at Duo, said her agency has designed a so-called third marriage group for a growing amount of clients who seek to walk down the aisle for the third time.

At a time when the society’s divorce rate is rising and more and more people go through trials and errors to find their perfect match, an overall reluctance to legalize relationships seems inevitable, said Lee. But the legal system has not evolved to deal with more common-law marriages.

When a spouse in a common-law marriage dies, the surviving partner does not automatically inherit anything.

A 73-year-old man fought in vain after his wife, whom he married in 1995, died in 2008. Despite 13 years spent together, the man, who requested anonymity, was left without a penny because they never registered their union. The man took his case to the Seoul Family Court in an effort to split the 2 billion won ($180,000) property of his wife with her four daughters, all of whom were from previous marriages, but was eventually defeated.

Separations can be bitter too.

“There are far more disadvantages to a breakup when you’re in a [legally] unstable position,” said Lee Hyeon-gon, a local lawyer. “It’s time for the law to reflect these changes in society.”

Kim Hyeon-jin, a lawyer at Shin and Kim, said legally married spouses get a larger share of an estate than children when someone dies, making children wary about their divorced or widowed parents remarrying. Often they will put pressure on the parent to live as a common-law spouse.

“The spouse is entitled to 50 percent more than a child, and this rule applies to families whose parents legalized their marriage right before one of the two dies,” said Kim. “Almost every person who has a parent with property deters them from formalizing their marriage.”