Bears left-hander on the right track

Bears left-hander on the right track 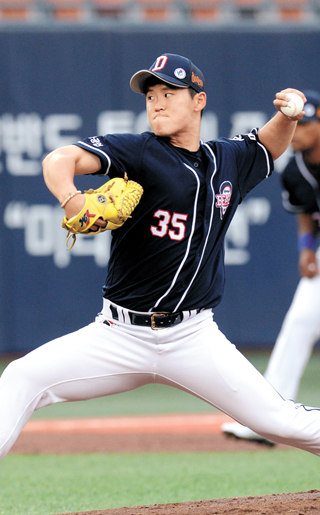 Jin Ya-gob of the Doosan Bears delivers a pitch against the Nexen Heroes on June 5 at Mokdong Baseball Stadium in Seoul. [NEWSIS]

The Doosan Bears, currently third in the Korea Baseball Organization (KBO) League standings, traditionally have been known for lacking good left-handed pitchers. Not this year.

Yoo Hee-kwan is tied for most wins in the league with 11 and second in ERA at 3.01, and Jang Won-jun, who joined the Seoul team from the Lotte Giants, is 7-4 with a 3.32 ERA. Along with Huh Jun-heok and Jin Ya-gob, Bears lefties have amassed 23 wins.

The growth of Jin is an especially welcome development for the Bears. When the 26-year-old joined the team in 2008 after graduating from Seongnam High School, he was known among fans for a 154-kilometer-per-hour (100-mile-per-hour) fastball in the Asian Junior Baseball Championships in 2007.

In his rookie year, Jin went 2-0 with one hold and a 4.45 ERA in 33 games. But back pain forced him off the team and the 182-centimeter (6-foot) pitcher eventually joined the Korean Police baseball team in 2013 to finish his military duty.

Jin returned to the Bears in 2015 and was selected as the team’s fifth starter after 31-year-old veteran Lee Hyun-seung was hurt during the preseason.

In his first eight starts, the Seoul native went more than five innings just once.

But Jin turned in his best performance June 11, shutting down the LG Twins for seven innings on just two hits. He is now 3-3 with a 5.69 ERA.

Jin has struggled of late, but Bears manager Kim Tae-hyung isn’t too worried. In his latest start against SK Wyverns on Thursday, Jin allowed five runs in 5 2/3 innings on a three-run homer in the fourth inning and a two-run shot in the sixth.

At the same time, he also gives up a lot of walks. As of Monday, Jin was second in the league in that category, allowing 47 bases on balls in 14 games, an average of 7.6 per nine innings. Lucas Harrell of the LG Twins has issued 53 walks in 16 games.

However, the Bears have been encouraged because Jin’s control is getting better and he has been giving up fewer walks in recent games.

Excluding his best performance of the season on June 11 against the Twins, Jin had been giving up at least four bases on balls whenever he started this season, but in past two games, despite allowing nine runs, he gave up a total of only five bases on balls.

“His pitches are now around the plate and that’s a good thing,” said his manager.

The Bears’ No. 35 is an introvert whose apparent passivity might have been one reason why he struggled in the first place.

“I envy my roommate, Lee Hyun-ho, for getting along so well with senior players,” Jin said. “For me, I go directly to my home after the game and sleep. I don’t drink well, and I do get nervous a lot on the mound.”

To boost his self-confidence and courage, Bears coaches have tried such tactics as ordering him to sing in front of several people and even scolding him during training.

“Jin worked really hard, even compared to those who are known as exercise addicts,” Kim said. “However, he also collapsed when the result wasn’t good. It was obvious to the many people around who were hoping he had a good performance.”

For this season, Bears fans nicknamed him “Gobshaw,” mixing his name with that of the Los Angeles Dodgers’ top southpaw, Clayton Kershaw, to show him more support.

As another way of trying to change his image, Jin is trying something new: chewing gum.

“When I was shaken after allowing a hit, I know I felt vulnerable,” Jin said. “In order to get tougher when I’m facing a challenge and to look stronger, I started chewing gum. It also helps me to focus on the mound.”

By the evaluation of Kim Jin-wook, who was the Bears pitching coach from 2007 to 2010, Jin has made the right changes.

“These days, Jin is challenging batters more aggressively,” he said. “I think people can expect more good things from him in the near future.”

Jin said he is building confidence whenever he is on the mound, and whether he pitches well or not, the important thing is he now enjoys the game.

“In the past, fans didn’t know who I was, but now I hear them calling my name,” Jin said. “Baseball is getting more fun.”