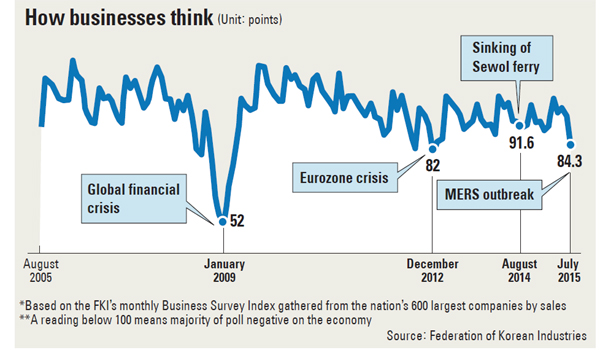 With the Middle East respiratory syndrome (MERS) outbreak, the business outlook for the economy this summer is worse than it was after the Sewol ferry disaster last year.

According to a business confidence survey of the country’s 600 largest companies by revenue by the Federation of Korean Industries (FKI) released Monday, the economic outlook index for July was 84.3, compared with 52 after the global financial crisis in January 2009 and 82 after the eurozone crisis in December 2012. Last year, the survey score was 91.6 after the Sewol ferry sank.

July’s 84.3-point outlook was a plunge compared with the June business outlook (96.4) that was given in mid-May.

The Business Survey Index uses a baseline of 100, and a score higher than that means companies are confident about the month ahead. Scores lower than 100 reflect pessimism, and the lower the score the greater the pessimism.

Light industries like textiles, consumer goods, and food and beverage businesses had the worst outlook at 74.6 points, followed by nonmanufacturing industries (84.2) and heavy chemical industries (87.2).

Utilities, entertainment, broadcast and telecom industries had a pessimistic outlook for July, as did pharmaceutical and plastics companies, compared with June.

The FKI attributed the negative outlook to substantial shrinkage in domestic spending and poor consumer sentiment.

According to the FKI, credit and debit card spending on leisure activities, arts and culture events, tourism and accommodations dropped as much as 31.2 percent in the first two weeks of June compared with the same period in May.

The nation’s consumption sentiment for June was 99, the lowest in two and a half years.

“The business confidence index for July showed a sharp decline due to nearly 10 percent more survey participants expecting that July will be a difficult month,” said Hong Seong-il, head of the finance department at FKI. “This reflects the impacts of the long slowdown in exports, external economic uncertainties and snowballing MERS outbreak.”

The Small Business Health Index, another confidence survey for July of 2,850 small and medium-sized enterprises (SMEs) by the Korea Federation of SMEs, dropped 8.5 points month-on-month to 81.5 points for July. This was the lowest level since February.

The index for both manufacturing and nonmanufacturing industries dropped, but the plunge was the greatest in the service sector, which includes accommodations and dining businesses, as well as the arts and sports industry and transportation.