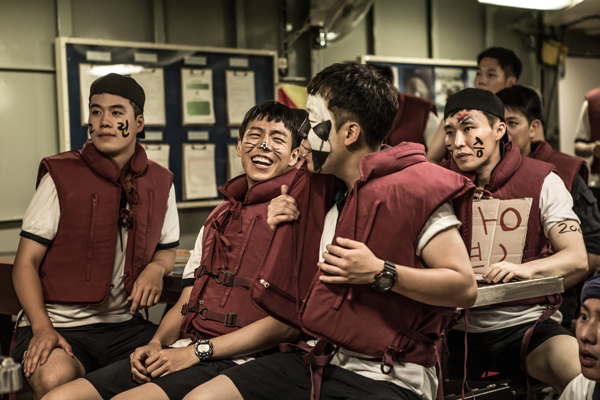 Kim Hak-soon’s “Northern Limit Line,” which depicts the Second Battle of Yeonpyeong, broke the domestic opening weekend for a Korean film. Provided by the distributor

“Northern Limit Line” delivered the largest-ever local opening of a domestic film, bringing in 8.7 billion won ($7.8 million) over the weekend, according to the state-run Korean Film Council on Monday.

Directed by Kim Hak-soon, the film sheds a new light on the Second Battle of Yeonpyeong that killed six South Korean naval staff on June 29, 2002. In the battle, a North Korean guard ship raided one of the South’s high-speed boats (Chamsuri 357) near the Northern Limit Line (NLL), the de facto maritime border between the two nations.

However, the deadly naval attack couldn’t receive much media and public attention at the time because it happened during the Japan-Korea World Cup, and on the day of the battle, the third-place playoff match with Turkey was scheduled to be held.

Another excellent performer at the box office was crime flick “The Classified File,” based on actual events, which ranked third with 505,925 tickets sold. Now in its second week, the film has sold a total of 2.2 million tickets, bringing in 17 billion won.

In fourth place was “Minority Opinion” with 139,223 tickets. The movie is loosely based on what’s called a “Yongsan tragedy” in which a fierce confrontation between residents, who felt unfairly compensated after losing their homes and businesses to a neighborhood redevelopment plan, and police officers lead to the death of five civilians and one police officer. The film traces a fictional legal war where a public defender, Jin-won (Yoon Kye-sang), asks for compensation of 100 won from the state government for killing a teenager at the rally.

Meanwhile, the fourth installment of the “Jurassic Park” franchise remained strong at the domestic box office, staying in second place with 641,595 moviegoers. Its three-week total is now 4.4 million ticket admissions or 39 billion won.