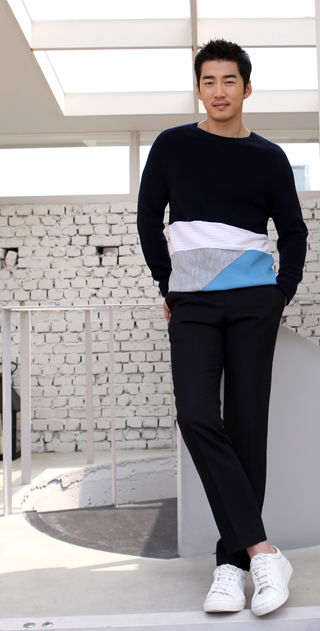 Two years have passed since singer-turned-actor Yoon Kye-sang participated in “Minority Opinion,” a film that touches on a sensitive social issue known as the “Yongsan tragedy.”

Although the film directed by Kim Sung-je is fictional, it was adapted from a novel based on the disaster written by Son Ah-ram. The film’s political connotations are one of the reasons why it struggled to find a distributor.

The tragedy occurred during a confrontation at a building in Yongsan, central Seoul, in 2009 between a group of policemen and evicted tenants who claimed to be owed more compensation for the redevelopment of the area. On its rooftop, where some 40 tenants were participating in a sit-in protest, a fire broke out and caused the death of five protesters and one policeman.

Yoon’s character, Jin-won, is a public defender fighting for one of the protesters named Jae-ho (Lee Gyoung-young), who lost his son in the tragedy.

In a recent interview with Ilgan Sports, an affiliate of the Korea JoongAng Daily, the 37-year-old actor said the script for “Minority Opinion” seemed too challenging and heavy for him when he first read it.

“Nevertheless, I didn’t give up and took it,” he added. “I just feel thankful that it can finally meet the audience.”

Q. What was your mind-set when you filmed “Minority Opinion” in 2013?

A. At the time, I was overwhelmed with a feeling of inferiority. I wanted to be a celebrity while also wanting to be an accomplished actor. So when I first came across this script, I wondered if I could do it. Like Jin-won in the film, who improves himself as he proceeds with the lawsuit, I wanted to develop as an actor.

What do you think is the message of this film?

In the process of bringing a lawsuit against the government, so many flaws in the legal system are shamelessly revealed, which I think is very ironic.

One of the last scenes that take place at the court was very strong. How did you feel at the time?

Director Kim said that scene was going to be filmed like a theatrical play [where the camera moves spontaneously according to the actors’ performance], so I practiced a lot by myself. I was very passionate at the time. The hardest thing was feeling as though I was being judged by a panel, acting alongside Yoo Hae-jin, Kwon Hye-hyo and Lee Gyoung-young, all of whom have plenty of experience on stage. That sort of tension was my biggest motivation. I strived very hard not get alienated.

Since you debuted on the film scene in 2004 through “Flying Boys” you’ve worked constantly. Is being an actor still very attractive to you?

I am still attracted to it, very much so. I still crave it and want to do well, maybe because I am still not good at it. I don’t know exactly why. I’ve recently realized that it takes a lot of time to improve, so I try to experience as much as I can these days.

How is your next webtoon-based drama project “Last,” which will air on JTBC from next month, coming along?

My character is a very macho-like, which is the type of character that I have always wanted to play. Chemistry with my male partner Lee Bum-soo is very nice as well. Although there aren’t any fist fights, a spark comes out of his eyes, which is one of the things I like about acting with male actors. I prefer this kind of noir genre rather than sugary rom-com.