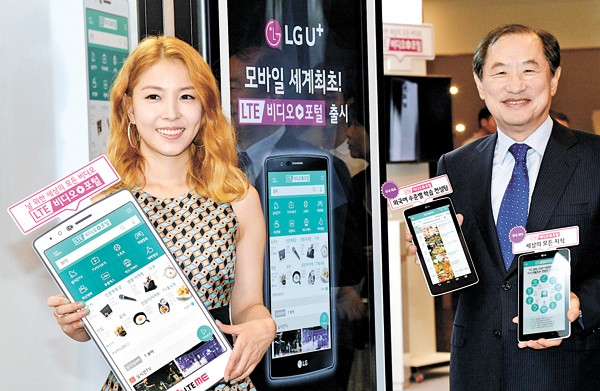 Lee Sang-chul, CEO of LG U+, right, holds tablets that will allow subscribers to access its LTE Video Portal, which provides a huge library of video content, at the mobile carrier’s office in Yongsan, central Seoul, on Monday.[NEWSIS]

Long overshadowed by larger competitors SK Telecom and KT, LG U+, the third-largest Korean telecom, aims to lead the market by concentrating its focus on video entertainment.

At the center of its strategy is a mobile LTE Video Portal, which will start running on July 1.

The key is the range of video content on offer, from movies, television shows and sports broadcasting to YouTube video clips and e-learning materials. It encompasses both video on demand and live streaming.

The CEO of LG U+ made it clear that video entertainment will be the company’s primary focus in offering content to its smartphone subscribers.

“We are moving toward a new era in which people communicate and share their stories through videos,” said Lee Sang-chul, CEO of LG U+.

“In the past, we just watched a video. And then we started making videos through YouTube. Now it is a medium of communication.”

Lee stressed that customized content services - not faster Internet speeds - will define the fates of telecom companies in the future.

“The success of the service depends on whether we manage to offer what customers want to see,” Lee said.

The company said that the video platform will offer extra features on top of streaming videos.

For example, if a user is watching a TV program about a restaurant, he or she can look up its location simultaneously via Google Maps.

For users interested in learning foreign languages, the video service will offer a free test through which they can measure their language abilities.

The company said that it will leverage its sprawling LTE network in offering the new video service.

It said 80 percent of its customers are on LTE networks and hopes they will become the major users of the new platform.

LG U+ subscribers can use the video service and will be charged per video clip they watch. Customers of SK Telecom and KT can also register for the service.

Along with the video streaming service, LG U+ introduced a smart home platform.

The move is intended to tap into the Internet of Things (IoT).

The CEO said that IoT is an area in which the telecommunications provider will heavily invest.

“Combining the IoT into its products and network services is something that telecom companies really specialize in,” said Lee.

“We have a large pool of data and can see what people do on mobile devices,” Lee said. “This is why telecom companies are well-informed and prepared to provide the IoT services.”

Telecom companies are pursuing new revenue streams by connecting their customer pools with broader services such as media.