Art forms come together at PADAF

Art forms come together at PADAF 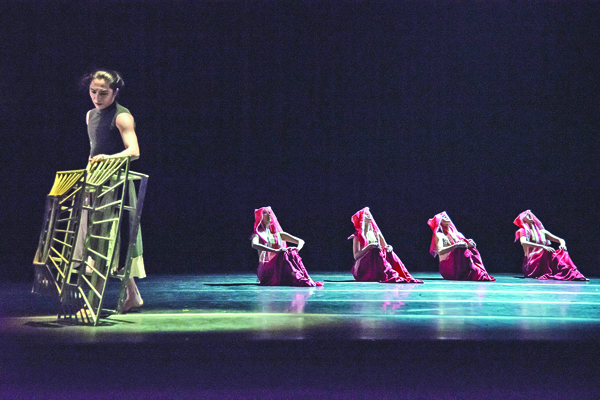 The Play Act Dance Art-Tech Film Festival kicks off today at various venues around Daehangno, central Seoul. “Instant Response,” above is a performance by choreographer Kim Hye-rim. Provided by the organizer

But nowhere is this so evidenced as in the Play Act Dance Art-Tech Film Festival (PADAF), which kicks off today under the theme, “Difference? Harmony by Convergence!” and runs through July 12.

Now in its fifth year, the festival has gone further, making its first attempt to integrate cultural contents by embracing a wider range of the arts: choreography, film, theater, fine arts, photography, music and fashion.

“We are pursuing a more creative and closer form of convergence and integration, not just the combination of conventional genres,” Han Seon-suk, the president of the festival’s organizing committee, said during a press conference last week in central Seoul. “Given the current social atmosphere, I hope the festival will please its audience.”

The first act to be staged will be the physical comedy “Cocorico,” featuring Patrice Thibaud and Philippe Leygnac, France’s best-known comedic performers. The collaboration, a wordless and multi-instrumental mime show established in 2008, is sure to give audiences a new perspective.

The festival brings a number of collaborative works this year by a Korean choreographer, English filmmaker and German music director, and 13 domestic works, all taking place at the Daehangno Arts Center in central Seoul.

“Sinawi Sanjo,” a dance musical created by Modern Table, led by choreographer Kim Jae-duk, is another piece that shines, with complex improvised moves and rhythms.

“Convergence or integration seem to be the most popular trends in the field of the performing arts recently,” said Cha Jin-yeob, a festival ambassador. “We’re attempting to combine various genres, and the outcomes are quite rewarding.”

This year’s PADAF also focuses on showcasing and fostering new artists, selected in a workshop held April 20 to May 1. Eight well-received experimental works are scheduled to be staged at the studio theater of the Dongsoong Art center in central Seoul.

“What we pursue is a melting pot, in which all genres are blended together, not a salad bowl which is just a mixture of individuals,” she told a reporter when asked about the festival’s objective. “Though we started as a salad bowl, I’m confident that we’re moving forward step by step.”

A free exhibition of paintings depicting the artists’ performances will be held in the Gallery Iang at the Namseoul University Art Center, central Seoul.

A public performance, PADAF Community Art, will also showcase performances by choreographers and B-boys on the crosswalks near Hyehwa Station on July 4.

Additionally, a variety of acts are on offer July 12, in the studio theater of the Dongsoong Art Center.

Talks with writers are included in the festival’s run from July 1 to 3, as well as a forum on July 10 centering on “The Future of Convergence Arts.”