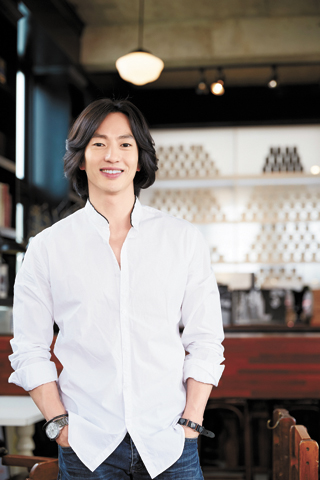 After two years, the Korean production of “Jesus Christ Superstar” has returned to the Charlotte Theater in Jamsil, southeastern Seoul, where it kicked off on June 7.

The show, loosely based on the life of Jesus Christ and his relationships with the people around him during the weeks before his crucifixion, is the brainchild of renowned composer Andrew Lloyd Webber and lyricist Tim Rice.

But on the first day of rehearsal, veteran Broadway musical actor Michael Lee, who is reprising the role of Jesus, walked in feeling confident and undaunted by the role’s complexity. The part of Jesus is known for its complexity as it requires performers to have not only an extensive vocal range, the role also requires outstanding acting chops.

The first time in 2013, the Korean-American actor only had three months to memorize the lyrics in Korean and fine-tune his pronunciation. Yet, this time around, he already had the lyrics in his head, his Korean has improved and even the director was the same as the last time. 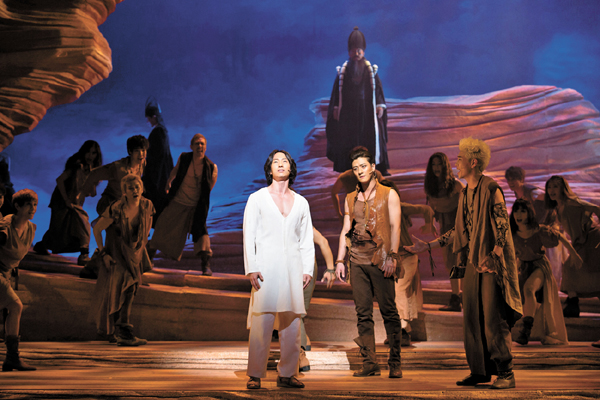 Michael Lee reprises the role of Jesus in “Jesus Christ Superstar” at the Charlotte Theater in Jamsil, southeastern Seoul. Provided by the organizer

“I came in very comfortable, thinking it would be easier because I’d done it before. It was the same show and the same director,” Lee said. “I said, ‘I know these lyrics, I know the show, I know the staging and it’s going to be fun.’”

However, those reasons also made it “much harder,” Lee said.

“When I came back to rehearse for this production, I was, in a way, trying to imitate what I did in 2013,” he explained. “It became too strong. It became acting rather than being. And the director, Gina Lee, noticed this and said we had to break everything down and crush me so I could start building myself up again slowly.”

What the director of the domestic production wanted this time from Jesus was a character “more kind, more gentle and more like God,” the actor said. “She wanted me to be more than a human, so that was really hard for me.”

But as a veteran musical actor, Lee managed to lose his former Jesus persona and returned to the stage as a more “godly Jesus,” with deeper emotions and charisma as well as almost perfect Korean pronunciation.

Lee will continue in the role until early September, when his alternate will permanently take his place. After returning to the United States, he is set to appear in the Broadway musical “Allegiance.”

To hear more about “Jesus Christ Superstar” and Lee’s time in Seoul, the Korea JoongAng Daily sat down for an interview with the actor last week. The following is an edited excerpt:

A. When I did it on Broadway, it was directed by another female director named Gale Edwards from Australia. Gale wanted to match the modern-day energy with the energy and the setting of the [life and times of] Jesus. So there were modern-day aspects in the show mixed with traditional aspects. That was done through the multicultural casting, through the music style and through the sets and the costumes.

No one doubts her talent, and Ms. Lee is famous for being a fierce director - making almost all musical actors tremble. But you mentioned that you would do anything for her. What kind of director is she for you?

She’s incredibly smart. She used to be an actress. I think that’s incredibly important for a director to have that experience because she knows how much courage it takes to be on stage. She knows the feelings and emotions of what actors go through and she knows what actors are capable of doing. Gina has a very unique ability to see in actors and actresses’ strengths and to build a character around them.

She took time with everybody. It must be so tiring. Plus, she’s a professor at a university and she doesn’t have so much time, but she does. She is very strict and she is very hard, but she loves actors and that’s why I’ll do anything for her.

Despite the show’s renown - with music by Andrew Lloyd Webber and lyrics by Tim Rice - as well as its great casting and Lee’s reputation as a director, the show doesn’t seem to be drawing in as many viewers as it should. What’s your take on that?

“Jesus Christ Superstar” has a history - no matter where it’s done - of having a difficult time selling. The first time it was produced on Broadway in 1971, it ran for about one year, which doesn’t seem like a long time but it was back then. Since then, there’s never been a successful Broadway production of the musical. I think it’s because many people hear the title of the show, “Jesus Christ Superstar,” and non-Christians believe it’s simply about religion, and they think it’s about Jesus, so they don’t want to see it.

For Christian people, they hear the title [and because] it’s a rock musical they think it’s anti-Christian, so they don’t want to come and see it. But it’s just a story. It’s a story of a man and the people around him. So I think that’s part of the reason why it doesn’t sell initially.

So why do you think great actors and directors keep coming back for it despite this drawback? Why did you come back, and what’s the charm?

It’s such a powerful piece of theater. Good musical theater shows, in my opinion, are very rare. The combination of music, lyrics and staging all have to be strong in order for a musical to succeed. For “Jesus Christ Superstar,” the music and lyrics are great.

Of course, the story is powerful. So if you combine that with a good director and then on top of that you find good actors, it can be one of the greatest theatrical experiences ever. I think good actors and good directors know good work when they see it. Rarely do actors or directors choose a project because they’re thinking about how many tickets it’ll sell. Once you start doing that, you’re in trouble.

Tell us about your upcoming Broadway musical “Allegiance.”

It’s about Japanese internment [in the United States] during World War II, [and] about how American-born Japanese citizens were treated like criminals after Japan bombed Pearl Harbor. Their money, property, everything was taken by the Americans and they were sent to camps.

It’s about how the young generation felt about it and how they dealt with it. Some young men decided to enter the Army to fight for the country to prove their loyalty ... to say, “If I die for the U.S., you’ll see how much I believe in you.”