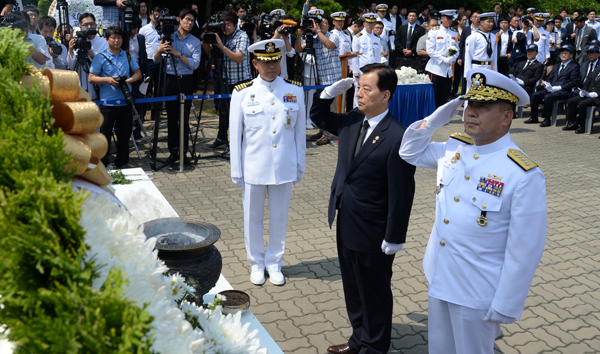 Defense Minister Han Min-koo, center, pays his respects Monday before a monument honoring the Second Battle of Yeonpyeong to commemorate the 13th anniversary of the deadly naval clash. The ceremony was held at the Navy’s 2nd Fleet Command in Pyeongtaek, Gyeonggi. Navy Chief of Staff Jung Ho-sub stands right. [NEWSIS]

Defense Minister Han Min-koo vowed on Monday to strike back without hesitation if North Korea initiates an armed provocation in the heavily guarded maritime border in the Yellow Sea, pledging that the military would target not only the origin of attack but also the commanding and augmenting forces.

In a highly observed address at the Navy’s 2nd Fleet Command in Pyeongtaek, Gyeonggi, that commemorated the 13th anniversary of a deadly naval clash in the Yellow Sea, the top military man noted that tensions had been on the rise due to continuing affronts by North Korea in breaching the maritime border, known as the Northern Limit Line (NLL), and added that his forces would “make sure the enemy pays the price for its provocations.”

Those present at the event included the relatives of the six soldiers killed in the attack, the officers who fought against the North Korean ships and politicians from across party lines, including the chairmen of the ruling and opposition parties, Kim Moo-sung and Moon Jae-in.

“We will make them realize that they have nothing to gain from issuing threats or staging attacks,” Han said.

He went on to define the battle as a victory for South Korea.

“The Second Battle of Yeonpyeong was a victorious fight in which our soldiers successfully fended off the North’s [attempts to cross the NLL],” he said.

The commemoration was the first time a defense minister attended and delivered a commemorative speech marking the anniversary of the skirmish. In honor of the fallen six, the South Korean Navy had six missile-guided patrol ships named in their honor.

North Korean patrol ships breached the NLL before abruptly opening fire on South Korean naval vessels on June 29, 2002, when many South Koreans were celebrating the national team’s impressive performance at the World Cup, co-hosted that year by South Korea and Japan.

The area around the NLL has remained a potentially volatile conflict zone. Eight years after the Second Battle of Yeonpyeong, North Korean forces torpedoed the Cheonan warship on March 26, 2010, killing 46 men in uniform.

The Second Battle of Yeonpyeong has been the focus of renewed public attention since the film “The Northern Limit Line,” based on the skirmish, hit the domestic box office, drawing more than 1 million viewers since its opening last Wednesday.