Paintings and politics are signs of our times

Paintings and politics are signs of our times 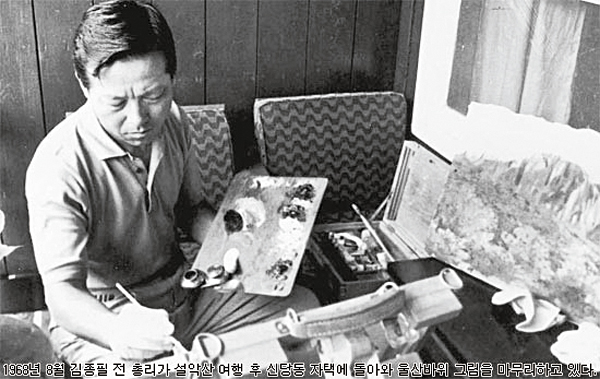 Kim Jong-pil paints Mt. Seorak in Gangwon at his home in August 1968. Provided by Kim Jong-pil

To me, painting is a recollection of my life journey. The paintings I have done all these years reflect on times and experiences I have undergone. There are two that I presented to universities in the United States.

One is entitled “Fist,” which was sent to Colombia University in New York. I drew the firm shape of my own fist in 1984 to illustrate my longstanding political philosophy that justice without power is helpless; and power without justice is mere violence. People make fists when they are saddened or are committing themselves to a greater good. A fist has become something that symbolizes my life principle.

I also presented a painting to Westminster College in Missouri entitled “Bongsan Talchum,” referring to the traditional masked dance that was used as a medium of public expression by the general public in the Joseon dynasty (1392-1910). When I sent it, I explained, “In the past, Koreans satirized and mocked corrupt politicians behind masks. This painting reflects on a past time when people longed for change in the status-quo and improvements in their lives.”

The painting is hung alongside a painting drawn by former U.S. President Dwight Eisenhower. 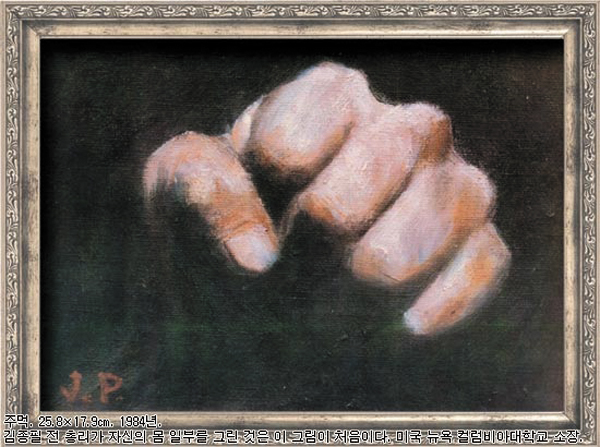 For me, painting is not a mere hobby to kill time. It is work that reflects on my life. Each of my pieces has a special meaning that encompasses principles that guided my life.

Former Prime Minister Winston Churchill of Britain was also renowned for his artistic skills. He once famously vowed, “When I get to heaven I mean to spend a considerable portion of my first million years in painting, and so to get to the bottom of the subject.”

Churchill found involvement in painting when he had a political fall from grace in the middle of World War I and he left behind about 500 paintings that exist to this day. Churchill wrote that “the Muse of Painting came to my rescue” when he had been forced onto the political sidelines.

Like Churchill, I also began painting when I was briefly sidelined from the center of politics in 1968 when I was 42. I went on a tour of famous mountains in the country with members of my painting club. In my adolescent years, I liked drawing. But I stopped painting in high school and it took me over 20 years to start again.

I remember one funny incident from August 1968. I was in Gyeongju, North Gyeongsang, with professional painters. I was drawing the stone ice storage facility built during the ancient Silla Dynasty (57 B.C. - A.D. 935). I was busy painting when a group of students from Ewha Womans University, who were on a school trip to the historical city, surrounded us and made blunt remarks about all of our works in progress. One of them pointed at my painting and blurted out, “This guy’s drawing is the worst of all!” We all burst out laughing.

In the summer of 1968, I visited a beach in Gangneung, Gangwon, with my painting club. As I concentrated on drawing waves, a journalist who accompanied us asked if I was planning to sell my works and contribute to local districts that were suffering from a severe drought that year.

I said, “Who would buy my paintings?”

When I returned to Seoul, I found out the reporter had published a story saying I was planning to hold a personal exhibition of my works to contribute to the cause of people hurt by the drought. I had no choice but to hold an exhibition. To my surprise, all 16 paintings I put up for sale were sold, earning 5 million won ($4,451). At the time, it cost 30,000 won to pay for one semester’s tuition at a public university. I donated all the money to Naju County, South Jeolla, which had suffered the worst from the drought that year.

In 2001, I made a calendar with my paintings and gave them to people in political and business circles whom I had known for years. Of about 40 paintings I chose for the calendar, 12 were landscapes portraying mountains around the country in different seasons. On the front page of the calendar, I wrote, “The will of heaven does not go against reason.” When I was in my 30s, I carried out the revolution [the 1961 coup d’etat] in a bid to restore the politics of reason to Korea and I have tried to apply that mind-set to my paintings.

Ancient Greek philosophers say politics is the work of artists. It reflects their desire to put the work of politics on the same level as that of art. As every aspect of art longs for beauty, every politician should also long for a world that has beauty inside. Then one will see a world that lives on ideals.