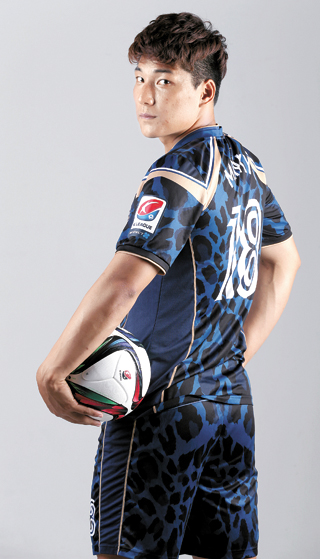 In December, footballer Joo Min-kyu received a call that would shift the course of his career.

The 25-year-old, who plays in the second-division K-League Challenge, was preparing to sign with new club Seoul E-Land FC after his contract with Goyang HiFC expired.

Joo had always played defensive midfielder, but Seoul’s inaugural coach Martin Rennie rang him to ask if he would switch to forward.

The Hanyang University graduate was hesitant, but he had always dreamed of becoming a striker. As a child, Joo admired Pohang Steelers coach Hwang Sun-hong - the second all-time scorer on the Korean national football team - and used Hwang’s signature number 18 on the back of his own jerseys.

Rennie, the former Vancouver Whitecaps FC coach in Major League Soccer, told Joo he had the potential to become a lethal striker, and should pursue his childhood dream.

On Sunday, Joo scored the game’s only goal against Ansan Police FC to clinch E-Land’s 1-0 victory. It was his 15th goal in 16 matches this season, further securing his title as the top scorer in the league.

Joo’s scoring record also surpasses national team striker Lee Jeong-hyeop, who plays with Sangju Sangmu. Lee has seven goals and six assists in 13 K-League Challenge matches. Now, there is even talk among football fans that Joo should get a shot on the national team.

With his performance, E-Land is currently second in the league behind Sangju Sangmu, with nine wins, four draws and three losses, and is eyeing a promotion to first division K-League Classic next year.

The team will play against Daegu FC tonight.

In an interview Thursday with the JoongAng Ilbo, an affiliate of the Korea JoongAng Daily, Joo said all the attention he is receiving feels like pressure. At the same time, Joo said he wants to show people that he can once again make the number 18 synonymous with top-scoring strikers.

Q. It’s not easy to understand a defensive midfielder switching to a forward. How did this happen?

A. After watching my K-League Challenge matches last season, I think coach Martin Rennie saw something in me. At the end of last season, he asked if I’d play as a forward and at first, I declined - I was really worried. However, I had three really serious talks with Rennie. He said he knew I could be a striker like Lee Dong-gook [of Jeonbuk Hyundai Motors]. After some serious consideration, I accepted his proposal with the commitment that I would try my best.

Did you wear the No. 18 on your jersey as a child?

When the 2002 FIFA World Cup was taking place, I was a sixth grade student in elementary school. I was a defender then, but I really liked Hwang Sun-hong who scored against Poland. So, I always went for the No. 18 jersey. I did dream about becoming a striker, but coaches who taught me had different ideas. Since professional football clubs usually go with foreign attackers, they persuaded me that playing as a midfielder or defender would offer me a longer career. I still respect their decision. After that, my role was always an “attacking midfielder.”

What is the attacking talent that coach Rennie found in you?

I still don’t know. Coach describes it as having a “special presence.” For instance, I’m skilled at getting the ball by putting defenders behind me, and whenever I clash with defenders, I’m praised for having a solid impact. Since I don’t have enough experience as a forward, I lack plays that use my teammates to score, but coach gives me detailed advice. People around me are surprised, asking me, “Could you really just score that easily?” I’m just happy that I can play upfront, and I practice hard.

You are often compared to Lee Jeong-hyeop of Sangju Sangmu, who is called “the next Hwang Sun-hong.”

I recently saw an article in which Hwang said, “I know Lee Jeong-hyeop well, but I do not know much about Joo Min-kyu since I have not seen his plays.” The article actually gave me more strength and motivation. I set a new goal to quickly get the opportunity to show my skills to Lee, because I respect him a lot as an athlete. He’s a player who already proved himself on the national team. He is a player that I should chase hard. It’s an honor to be called Lee’s competitor.

There is also speculation that you might be selected for the national team around August for the EAFF East Asian Cup.

I’m still not that good. I never thought about becoming a national team member. However, I know that whenever I get an opportunity, I will put my best effort forward not to miss the chance. I know what it means to wear the No. 18 jersey.