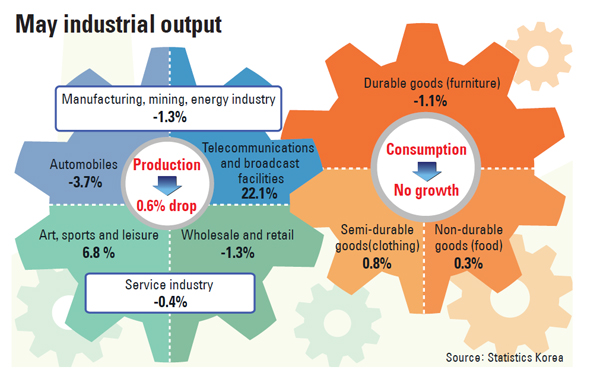 Industrial output in May declined 0.6 percent from April, falling for the third consecutive month under the weight of sluggish exports in core sectors, Statistics Korea reported Tuesday.

A 2 percent increase in construction was offset by drops of 1.3 percent in mining and manufacturing, 0.4 percent in services and 0.1 percent in public administration.

The drop in semiconductors and automobiles, two of the country’s core export items, came after Korean exporters struggled with price competitiveness due to the strength of the Korean won against other currencies such as the Japanese yen.

The average rate of factory operation in the manufacturing industry slid 0.7 percentage point to 73.4 percent in May, the lowest level of the year.

“The main reason [for the drop in industrial output] is sluggish exports,” said Jeon Baek-geun of Statistics Korea at a briefing Tuesday. “Automobile and semiconductor exports were sagging and that affected the overall manufacturing sector.”

The service industry saw growth in arts, sports and leisure (6.8 percent) and transportation (1.2 percent). But wholesale and retail fell 1.3 percent, and scientific and specialized skills shrank 3.2 percent, dragging down overall output in the service industry by 0.4 percent.

Retail sales maintained the same growth rate as in April.

According to the BOK, the Business Sentiment Index (BSI) in Korea’s manufacturing industry stood at 66 in June, off 7 points from a month earlier. The further the index falls below 100, the lower the sentiment of the business community.

The BSI in nonmanufacturing sectors sank by 11 points in June to 65.