Breaking up, even after violence, is hard to do

Breaking up, even after violence, is hard to do 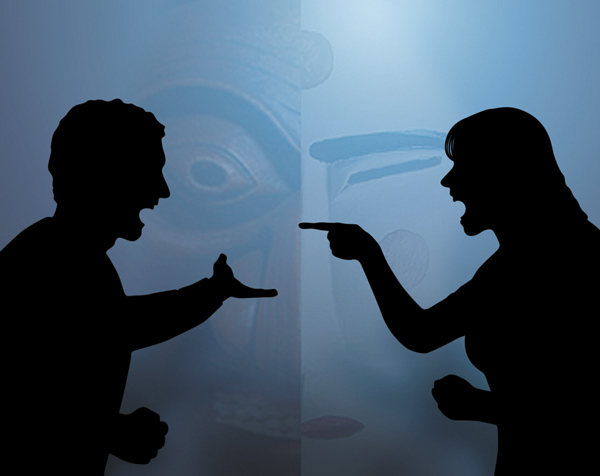 Moon Gye-rin, who calls herself a radical feminist, posted in her online blog about two weeks ago a commentary on a relationship she had with a man whom she says abused her verbally and physically. Although her original article was unsigned, she responded to comments left on her blog seeking her identity by posting her name. She said her romantic partner was Han Yun-hyung, who is a former media commentator with a liberal bent and still a widely followed poster on social media.

The dark story has had a ripple effect, inspiring many victims and assailants involved in relationship violence to share their stories.

Moon said the relationship with Han began in 2008 and lasted about four years. She said he was verbally abusive when upset, and even though he routinely apologized for his actions the next day, he continued to get irritated when he drank or when the baseball team he followed lost a game. She said he had struck her, and quoted him as frequently saying, “You act to instigate me to hit you. It’s your fault that I became so angry.”

Noting that he had grown up in a household where he witnessed domestic violence, she said he often was ashamed when he was emotionally stable. But Moon also admitted that she didn’t want to end the relationship, and said that at the time not losing him was more important to her than not being hit.

Relationship crime appears in the most intimate of human networks, and it isn’t limited to certain age groups. According to data provided by Rep. Park Nam-chun of the Democratic Party and acquired originally by the National Police Agency, there have been about 6,000 to 7,000 cases each year in Korea. Fifty-two people have died from relationship crimes, according to the data.

Increasing numbers of reports of sexual violence, including rape, have been received by police, with 678 cases last year, up from 371 cases in 2010.

“I do about 10 consultations a month on average with people experiencing violence in a relationship,” said Lee Jae-yong, a lawyer specializing in sexual crimes, adding that there are many more cases that are not included in the official statistics.

“One out of three people experience physical violence while dating,” said Seo Kyeong-hyun, a psychiatric professor at Samyook University. Many of the assailants and victims are in their 20s, but cases are also reported among people in their 30s, 40s and 50s. 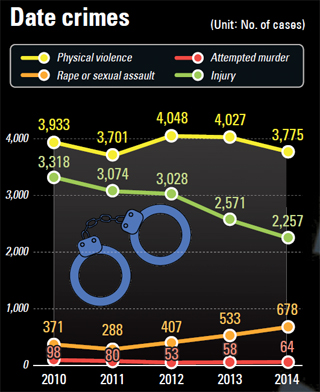 Although the majority of victims are women, there are some men who say they have been harassed by women. A 45-year-old woman surnamed Jeon asked her ex-boyfriend, who had broken up with her last August, to meet her one last time. She drugged him to put him to sleep and tried to have sexual intercourse, court documents say. She was indicted earlier this year and is currently on trial.

Relationship violence is also seen in some same-gender relationships. A 22-year-old college student surnamed Han was indicted for physical attacks on her girlfriend, who is two years younger than she. Han tried to stab her girlfriend with a kitchen scissors, saying Han had cheated on her with a male friend. Failing in that attack, she tried to choke her partner, hit her in the head with a rice cooker and cursed her. Han was convicted and ordered to serve two years in prison at her first trial, but the sentence was suspended two weeks ago pending three years of good behavior.

Why can’t people in an abusive relationship just get out? Byun Sin-won, a professor at the Korean Institute for Gender Equality Promotion and Education, said, “Victims have a hard time ending a relationship because of the hope and belief that things will change as time goes by.”

The professor added that most assailants are sincere when they say they are sorry and promise not to do the same thing ever again, so victims often buy into that sincerity and wait for their relationship partner to become a changed person. 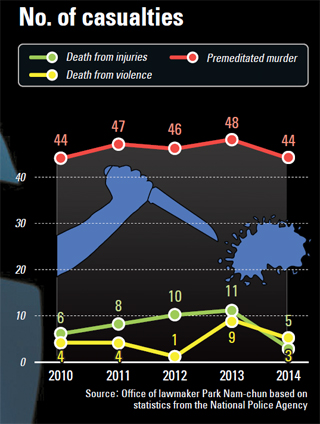 But that usually doesn’t work; the sincerity doesn’t last. Experts say it is hard to expect these assailants to change without outside intervention or treatment. So the usual pattern is a vicious cycle of violence, repentance and apology that continues endlessly.

No matter what the reason for such violence, if such relationship behavior continues without change for a long time, both partners will be damaged.

“Because most people want to seem happy when they are with others, they have a hard time telling people around them that they are being beaten by their partners,” said Lee Hwa-young, the manager of the sexual violence consulting department at Korea Women’s Hot Line. “Another problem here is that victims think they can just end things with abusive partners when they decide they want to.”

The director also said some of the victims had gained weight deliberately or continued doing only the things the assailants disliked to make their partner lose interest and leave.

But there are more barriers than one may think to ending such abusive relationships, and one of the major reasons is the fear of being estranged from the social groups both partners are in.

In one case, a 25-year-old college student named Lee met and became close with a male student surnamed Gwon, who was 29 in 2013 when they both transferred from other schools. Gwon forcefully asked for physical contact even when Lee showed discomfort.

When Lee refused, Gwon threatened to alienate Lee from all the meetings with other transfer students. Lee feared that she would have bad relations with the 11 other transfer students in her class and said nothing. Believing that enduring his sexual advances was easier than losing her social circle, she submitted.

Lee’s parents learned about the history between the two and then reported him to the local police. After Gwon was served with a lawsuit, he argued his innocence, saying every action between the two were consensual acts by people in a romantic relationship.

Last month, the Seoul High Court ordered Gwon to prison for five years and an additional five years with a location tracking device. Gwon has appealed, and the case is pending at the Supreme Court.

These days, relationship violence can also include threats made online and in digital media.

A 23-year-old named Han began serving a two-year in September for sending multiple text messages threatening his 25-year-old girlfriend Gwon, whom he met through a matchmaking application on a smartphone.

“I know your home address,” he texted. “I saw you buying cosmetics and going into a cafe.” “I remember your naked photo and know the phone numbers of your sisters and brothers-in-law.”

After they broke up, Hong continued at appear at Gwon’s place and assaulted her. Even when Gwon begged Hong to stop, he continued to go there. When she changed the passcode on her door, he tied her with a dog leash and hit her.

The harassment didn’t stop even after she moved and changed her phone number. Gwon at one point started dating him again because he relentlessly threatened to distribute photos and videos of her online. The threats stopped after Gwon finally shared her problems with her parents.

These days physical and sexual violence also can involve unwanted surveillance and monitoring by digital devices and accompanies threats to post sexual photos or videos online.

Because many people think they cannot reverse things once something is online and “goes viral,” they fear going to the authorities to report such cases even when they want out.

“Fearing the release of data on the Internet, many people don’t sue,” said Lee In-cheol, a lawyer. “Such an action is a serious crime and will be subject to some heavy punishment,” he said. “But many victims try to settle things amicably on their own by trying to calm the assailant.”

Some experts say Korean values about gender roles also instigate problems. “One of the reasons for relationship violence can be society picturing men to be masculine or justifying violence,” said Lee at Korea Women’s Hot Line. When a TV drama shows a man forcefully trying to kiss a woman, that can be misinterpreted as appropriate.

And violence in relationships will continue after marriage unless the problem is fixed. “There is almost no case of a person who has used violence while dating to stop the violence after getting married,” said Professor Seo. “If a person spots his or her partner being violent on dates, that person needs to act fast to end the relationship.”

Many experts say some people find it painful to cut off a relationship, especially if they are confused about the boundary between love and violence. To get out of abusive relationship, experts say victims should share their problem with their friends and family. Until the break is complete, make sure other people know where you are when you are with your partner, and avoid being alone with him or her.

If meeting with assailants is absolutely necessary, bring a trustworthy person along. Make sure to keep detailed records of verbal and physical abuse. Those notes, text messages and broken objects should be kept to buttress a criminal case if it becomes necessary to pursue one.

1. Emotional and language violence
• Acting angry so that a victim cannot decline a proposal to a date
• Make a victim feel embarrassed publicly
• Call victims by unwanted nicknames or belittle them about looks or personality
• Spread bad rumors
• Threaten self-injury when rejected for a date

2. Sexual violence
• Enforce unwanted sexual intercourse or behavior
• Forcefully stop the use of contraceptives
• Dodge responsibilities that come with sexual relationships such as pregnancy or infections.

5. Digital violence
• Interfere with online relationships with friends
• Repeatedly send insulting or threatening email or text messages
• Force to send a photo or video
• Constantly send messages or call and threaten when the victim doesn’t reply quickly
• Force to share personal log-in information to online accounts or find out password to look