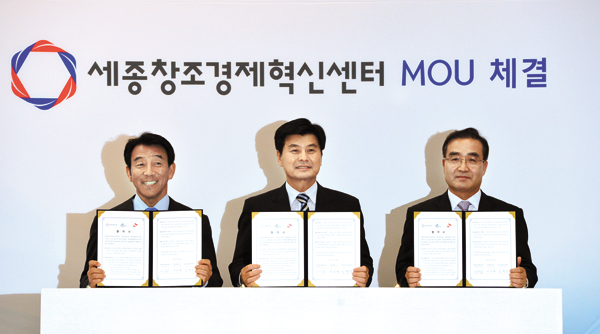 The Sejong Creative Economy Innovation Center is the nation’s 14th such center encouraged by the Park Geun-hye government to help regional economies and foster innovation. The government wants 17 such centers.

The government launched some trial smart farming zones in parts of Sejong last October. The technologies focused on by the Sejong Center include smartphone-controlled greenhouse systems and CCTV video analytics for surveillance of greenhouses and farming properties.

With the official opening of the Sejong Center, the government and SK Telecom hope to jointly standardize ICT-enabled farming technologies and spread them.

“Now is the time when Korea’s agriculture industry and rural communities need to change their paradigms,” said Prime Minister Hwang Kyo-ahn. “For the time being, the Sejong Center will become the main place for start-ups doing business with ICT-enabled smart agriculture.

“I hope such an ICT initiative helps all farming communities nationwide to foster their competitive edge and raise profitability, which would eventually enhance livelihoods of the overall communities,” Hwang added.

SK Group last year did a trial run of infrastructure for smart farms in a small village called Yeondong-myeon, Sejong City. Water supplies, CCTVs and boilers inside greenhouses were controlled through farmers’ smartphones. They could access information about temperature and humidity in real time. Participants reported reduced production costs.

SK and state-run research institutes based in Daejeon will jointly work on further development of those technologies and share them with new start-ups at the Sejong Center.

SK Telecom will form a fund of about 20 billion won ($17.9 million) to invest in smart farming technology training at the Sejong Center.