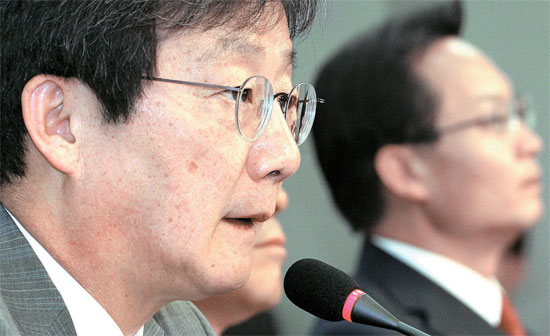 Loyalists to President Park Geun-hye inside the ruling party found themselves left with few options Tuesday in their crusade to pressure their current floor leader to step down.

Park’s loyalists jumped on the offensive after the president expressed her discontent with Rep. Yoo Seong-min, the Saenuri Party’s chief negotiator, on Thursday.

However, they found themselves outnumbered later in the day during a general meeting of party lawmakers, with the majority renewing their endorsement of the floor leader.

The relationship between the Blue House and the ruling party became even more tense on Friday, when President Park gave the cold shoulder to the Saenuri floor leader despite his attempts to offer an apology for having failed to properly assist her and mend political ruptures.

Park loyalists made another attempt to force him out on Monday, holding an emergency meeting of the party’s Supreme Council to discuss his fate, but that plan also failed as Yoo refused to resign.

The president’s supporters are currently considering their next step but have so far only been left with difficult choices.

A vote of confidence with Saenuri lawmakers was ruled out amongst Park’s loyalists, a minority in the Saenuri, which commands 160 lawmakers.

They also went further to stop any attempt by Yoo to push for a vote of confidence.

“There is no clause in the party’s Constitution nor any regulations concerning holding a vote of confidence for a floor leader,” Rep. Kim Tae-heum, a Park loyalist, said Tuesday in a radio interview. “But it would be ideal if Yoo voluntarily stepped down since the situation has grown this serious.”

Speculation has also grown that the president is preparing Rep. Choi Kyung-hwan, recruited to serve as her deputy prime minister for the economy, to return to the party to run for chairman.

That plan, however, is highly risky and would likely result in the party facing an irreparable split ahead of the legislative elections in April. There is also no guarantee that a Park supporter would win a senior seat.

“Destroying the Kim Moo-sung leadership is too damaging, and Park’s allies actually don’t have much to gain,” said a two-term Saenuri lawmaker. “They’re just talking about abandoning their leadership positions to pressure Kim to persuade Yoo to resign.”

Other Park loyalists said a last resort would be for Park to abandon the conservative Saenuri Party and create a new party comprised of her loyalists.

“Park’s remarks on May 25 showed her deep disgust toward not only Yoo, but the entire political arena,” said a long-time Park ally. “Taking into account her political style, it’s possible that the president is thinking about creating a new party.”

But such a feat would not be easy for Park, who still has more than half her term left, as the ruling party also controls a majority in the legislature.