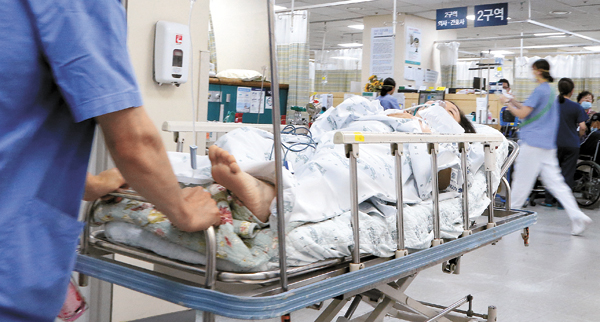 A patient is moved into the emergency ward on Monday at Seoul National University Hospital in central Seoul. Many experts attributed the rapid spread of Middle East respiratory syndrome (MERS) to overcrowded emergency wards at large hospitals. By Choi Seung-sik

The emergency room had fewer patients than before the outbreak of Middle East respiratory syndrome (MERS), but it was still hard to find people in urgent need of medical treatment. Most of the patients on Thursday were getting intravenous injections or appeared to have slight coughs.

“My left thigh was swollen when I woke up,” said Kang Su-cheol, 81. “It didn’t hurt much but I came here because I don’t need any sort of complicated treatment.”

Kang was not even ushered into a doctor’s office, but instead given an IV with antibiotics in the waiting room.

“I came here because I was sick and felt nauseous this morning,” said Kim Gyeong-sun, 61, who visited the emergency room with her husband.

She talked to a doctor for just three minutes before being given a prescription.

Doctors there acknowledged that most of the patients in the emergency room were not urgent cases.

“Some are fine enough to drive to the hospital,” said a professor in the emergency medicine department. “Others are even here for the morning-after pill.”

According to Seoul National University Hospital, 18,957 people visited its emergency room from January to May this year, and about 80 percent were not urgent cases.

And many experts believe that the main reason why MERS was able to spread so quickly here is directly related to emergency room culture in the country.

“People across Korea just go to emergency rooms at large hospitals in Seoul if they need treatment,” said Choi Jae-wook, an official from the Korean Medical Association. “And they crowd the emergency room while waiting their turns.”

In an analysis by the Ministry of Health and Welfare, 24 percent of some five million patients at 141 emergency rooms nationwide in 2013 were not in need of urgent medical treatment.

This trend was even more prominent at Korea’s top five hospitals, with many patients going to the emergency room for treatment without first seeking out assistance at smaller hospitals or clinics.

Those numbers mean that even those in serious condition must wait longer to receive treatment.

Among Korea’s 20 most crowded hospitals, average waiting time for those in need of urgent care was about 14.5 hours.

Analysts say that type of culture at emergency rooms was what allowed MERS to spread to more than 80 patients at Samsung Medical Center.

“Patient No. 14 stayed in the emergency ward for three days before being hospitalized at Samsung Medical Center,” said Professor Eom Joong-sik, an infectious disease specialist at Hallym University Medical Center and a member of the government’s MERS countermeasure headquarters’ immediate response team.

“Hospitals are now more vulnerable to infectious diseases because emergency rooms have become like waiting rooms for those who are hoping to be hospitalized.”

“In Britain, the government cuts down subsidies if the hospital lets a patient wait longer than six hours,” added Lee Gang-hyeon, the chairman of the board for the Korean Society of Emergency Medicine.

Experts say it is crucial to make emergency wards at general hospitals less crowded, which would prevent major diseases from rapidly spreading within medical facilities.

“First, we need to filter out those who are going to the emergency room without having first made appointments at smaller hospitals,” said Jeong Hyoung-sun, a professor of public health administration at Yonsei University.

Song Hyeong-gon, who heads the Emergency Center at Gyeonggi Medical Center’s Icheon Hospital, added “The gap between medical expenses for larger hospitals and smaller ones must be wider in order to send patients with minor symptoms back to smaller hospitals.”

The number of visitors patients are allowed to receive must also be limited, experts say.

“About three to four people come in for a single patient, and all of their family members are coming in to take care of them,” Song said. “To minimize the transmission of infectious diseases, you should only allow one person per patient.”

Confounding that issue, however, is that hospitals can hardly care for all the patients they already have, which more often than not pushes that responsibility on the family, said Kim Yoon, a professor of health policy and management at Seoul National University.

“Hospitals must expand their care-giving system so that nurses can take care of patients rather than their family members.”