‘You must rise again!’ a father begs his stricken daughter

‘You must rise again!’ a father begs his stricken daughter 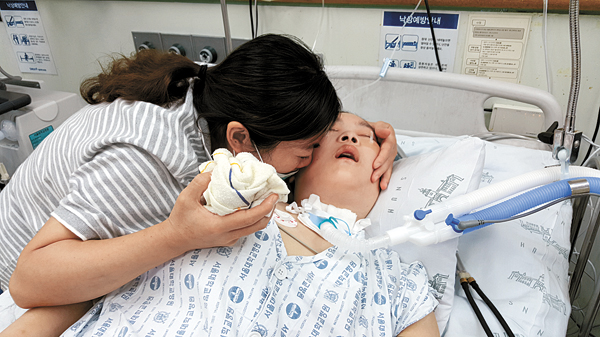 Wuyuan Xin (alias), a Chinese woman who came to Korea to study business administration at a private university, lies in a coma in an intensive care unit as her mother caresses her. By Chae Seung-gi

Today is the 163rd day I’ve been here, watching your eyes closed in quiet stillness. I’d like to believe you are simply asleep.

My beloved daughter Wuyuan, can you hear your father’s voice? The intensive care room here at Seoul National University Hospital is a wretched, silent space. If not for the constant whirring of medical devices, this place would be a complete vacuum - a vacuum that has sucked you up.

Our only daughter, you are just 25 years old. When you began watching Korean dramas in China as a teenager, you used to dream of visiting Seoul. In March of 2014, you finally got the opportunity to study in the country you so longed to visit. When you were accepted to study business administration at a prestigious private university in Korea, we were so proud of you.

“There’s not another person in China smarter than my daughter,” I bragged to my friends. 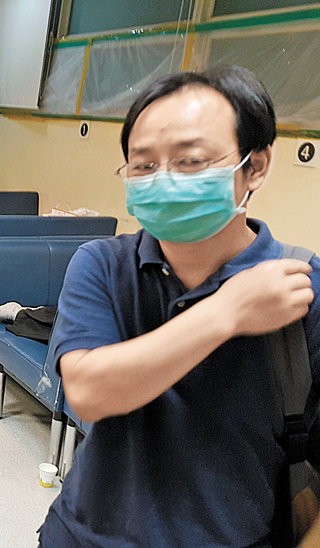 Her father waits to see his daughter during visiting hours. Wuyuan’s parents have been living in the hospital waiting room for more than 163 days. By Chae Seung-gi

But now my precious, accomplished daughter lies here in a hospital in the country of her dreams.

She is brain dead.

I received word about your plight on January 19. Your friend, who went with you to study abroad in Korea, sent a message via WeChat (a text messaging application commonly used in China).

“Wuyuan Xin got in a huge accident. You should come to Korea as soon as possible.”

I couldn’t believe it. You had spoken with your mother just a day before. You always made sure to call or talk with her on WeChat before her 10 p.m. night shift at the store. The WeChat messages you sent to your mother that day are still saved on her phone:

“What do you think of these clothes? Do they fit me well?”

After receiving the message from your friend, we rushed to Korea. When we opened the door to the intensive care unit, we found you lying on a hospital bed motionless. Someone next to us was saying strange things.

“During surgery for an abortion, her brain condition…”

The explanation, translated into Chinese for us, was so horrifying that your mother fainted on the spot.

That was when your mother and I began our struggle to learn the truth about what had happened. We pushed chairs together to make beds to sleep on, and began looking into the incident.

How on earth did you fall into a coma from an abortion in a developed country like Korea, with advanced medical skills and technology?

Approximately two months after the accident, at the end of March, officers from the Seoul Metropolitan Police Agency established a medical investigative team to examine your case from the very beginning.

What the detectives found was shocking. They said that you had suffered a medical accident during an illegal abortion. You were 12 weeks pregnant.

(Abortions are only allowed in Korea in cases when the mother’s health is in danger, or in cases of rape, incest or severe hereditary disorders. Abortions are completely not allowed following the first 24 weeks of pregnancy).

The police explained that during your abortion at a medical clinic in Seoul, you were injected with too much glucose. As you exhibited abnormal symptoms like nausea, the doctor kept delaying the surgery while giving you glucose injections. The glucose caused the sodium levels in your blood to plummet and your brain to swell up. Despite this, the doctor continued to inject you with glucose, saying it was necessary to prepare you for the surgery.

The doctor kept insisting to the police that you only received 1,000 milliliters of glucose, saying that it wasn’t an abortion but that the baby in your womb was already dead and the surgery was to remove it, and that the patient’s chart was erroneous.

The doctor was arrested and his nurse has been indicted without physical detention.

The doctor and other people at the clinic are denying all allegations. When we visited the clinic, they told us that you had physical problems. They changed your condition on the consent form to read “surgery for removal of a stillborn fetus” from “abortion.” It’s been found that they tried to erase CCTV records of your visits.

I’ll also let you know what’s happened to the man saved in your phone address book as “Ae-in” (the Korean word for lover). He accompanied you to the clinic and was present when things went wrong. He got scared and became extremely distressed. I heard that two days after you fell into a coma, he jumped into the Han River to kill himself. Luckily he was rescued. If the young man comes and begs for our forgiveness, I will forgive him.

Wuyuan, visiting hours are almost over. I can only see you in the ICU for 30 minutes twice a day, at 10 a.m. and 7 p.m. Do I hate Korea for what has happened to you? No. I’ve even met a lot of wonderful people. The custodian, who sees us sleeping on our chairs every day in the hospital’s waiting room, gives us kimchi.

True, a few Koreans have done us a lot of harm, but more have embraced and taken care of us.

So Wuyuan, I hope you will wake up soon saying, “Daddy!” I’ll whisper a prayer in your pretty little ear before I go: “Child, do not give up. You must rise again!”