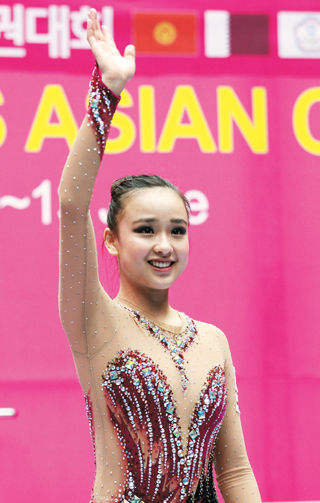 After defending her title at the Senior Rhythmic Gymnastics Asian Championships last month, Son Yeon-jae is aiming for gold medals in the 2015 Summer Universiade in Gwangju, which kicks off Friday.

This will be Son’s second appearance at the global competition for university athletes. At the 2013 Summer Universiade in Kazan, Russia, the 21-year-old took silver in the ball event and finished sixth overall.

For this Summer Universiade, world No. 1 Margarita Mamun and No. 3 Yana Kudryavtseva of Russia are not participating, raising Son’s hopes for a medal.

“It is expected to be a three-horse race between Son, Melitina Staniouta of Belarus and Anna Rizatdinova of Ukraine,” said Kim Ji-young of the Korea Gymnastic Association.

“If Son can overcome the pressure, she can win most of the five gold medals [four individual events and overall].”

Son, who is a junior in Yonsei University, was interviewed by Korea JoongAng Daily affiliate the JoongAng Ilbo last month in a studio where she was doing a photo shoot for women’s magazine CeCi.

The Asian champion said that she hopes to do well at the Universiade and use the event as a stepping stone to the 2016 Olympic Summer Games.

Q. You became the overall champion at the Senior Rhythmic Gymnastics Asian Championships last month. What’s your goal going into the Summer Universiade?

A. Earlier this year, I injured my ankle and hadn’t trained enough. I was tired both mentally and physically, but I wanted to defend my title as an Asian Games gold medalist. I also want to perform well in the Universiade, which is like a mini World Cup. I can’t promise I’ll win the gold medal, but I believe every step I take from now on is heading towards the Olympics in Rio de Janeiro next year.

You have many supporters, but you also have many critics.

I think I probably have the most [detractors] out of anyone. I’ve noticed those mean comments since I was in high school. They made me angry, because I would think to myself, “Why are they trying to hurt me while I’m working hard to raise the honor of Korea?”

I saw one comment saying I should give my Asian Games gold medal to the Chinese gymnast [who won the silver.] And it’s not just me - my parents and the people around me also get criticized, which makes things difficult.

But these days, I use that negative energy to make me work harder.

There was the controversy about your coach Elena Nefedova serving as a judge in the World Championships and Asian Games in which you competed.

The rhythmic gymnastics world is very small. This kind of situation didn’t just happen to me; other players are judged by representatives from their own country.

When you became high school student, you started to train overseas in Russia.

At first, I didn’t know how to speak Russian and everything was new. Since the facilities were reserved for Russians, I had to train only when they are not on training. Sometimes I had to train on the edge of the mat because it was so full of players. It cost up to 30 million won for just one year of training. Thinking about my mother, I worked hard every day. I couldn’t rest even when I was hurt.

Did you ever think about quitting rhythmic gymnastics?

I had those thoughts every year. After finishing fifth at the 2012 London Olympics, I really didn’t know what to do in the future. But I felt a lot of pressure because I had to continue training.

How did you overcome those difficulties?

Looking back, I think those bad comments about me were really motivating. I thought those evaluations would go away when I get better results, but everyone has someone they like and someone they don’t. It’s nice to get applause overseas, but support from my fans at home, who care about me and visit the gymnasium when I compete in domestic events, give me the most energy.

In May, CNN speculated that a realistic goal for you in the upcoming Olympics will be winning the bronze medal.

First, I’m thinking that I’ll retire after the games. Young players are already coming up from the bottom. I want to peak in the Olympics, and come up with my next plan later. There’s a saying that an Olympic medal is already decided in the heaven. I don’t know what will happen, but I think I can give it a shot. After finishing the Summer Games, I will enjoy school and think about my next move. I envy my friends who have boyfriends.

Some people call you “the next Kim Yu-na.”

That’s nice to hear. Rhythmic gymnastics and figure skating have a lot in common, in that they combine sports and art. I watched the Winter Olympics in Sochi and supported her, and my heart was moved. She should have felt pressure, but instead gave a clean and delicate performance. I realized I have lot to learn from her. I also want to be an athlete who can move people’s hearts.

How do you get rid of your stress?

I dine out with my college friends. Recently I have been reading this book called “Eight Words.” The book talks about finding happiness not in the future, but in present.