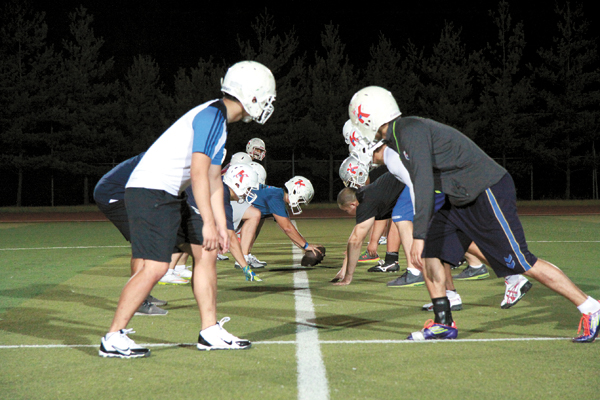 On Friday night, 14 football players gathered underneath the lights on a field in North Gyeongsang.

At the midfield line, some players prepared to take the snap while others crouched to tackle. As the ball was passed backwards, the two sides sprung at each other - but stopped just before making contact. Resetting into the same positions, they repeated this drill over and over and again.

This was one of the last days of training for Korea’s American football team, which is preparing for the International Federation of American Football (IFAF) Senior World Championship.

This international competition is held every four years. This year, the United States will be hosting the tournament in Canton, Ohio, from July 9 to 18. Seven countries will compete this year.

Korea reached the finals by defeating Kuwait 69-7 in a regional qualifier in 2014.

The team’s first game is against Australia, and head coach Baek Seong-il said he was focusing on strategies for the match. Aussies have an advantage in size; according to Baek, Australia’s offensive players are on average 20 kilograms (44 pounds) heavier than Korea’s.

“We need to do something our competitor doesn’t expect,” he said.

Korea last appeared in the competition eight years ago. Qualifying for the championship this time is a big achievement for the team, but the road hasn’t been easy.

Instead, all members paid out of their own pocket for the trip, about 2 million won ($1,800) each.

“Frankly speaking, the cost isn’t small even if you have a job,” said 29-year-old quarterback Kim Tae-hoon.

Kim added he was willing to pay the 2 million won because “a chance like this won’t come again.”

Jung In-soo, a 33-year-old linebacker, said that when he told his friends he’d paid his own way to the event, they didn’t understand his excitement because they figured anyone with enough money could go.

“People only see the money issue, even though I’m heading to a world championship to play football against teams from all around the world,” Jung said.

The KAFA has found five sponsors as of Friday, but the team’s budget hasn’t been finalized.

Baek said players were nervous about the amount each had to pay, but that he’d told them not to worry.

“I told players that what is significant is the way we play [in the championship], not the way we get there,” he said. “I said, ‘Just trust the association and follow their plan.’”

Money wasn’t the only challenge: most players and coaches also work full-time.

The championship trip lasts 15 days, so many had to get approval from their employers to take time off.

As of Friday, one coach couldn’t go because he couldn’t get the time off. Another coach would replace him, according to Baek.

At least one even quit his job to make the trip. Quarterback Kim left his position as an engineer for a medical device company so that he could play.

“Considering my position, I can’t be off for 15 days,” he said. “If I’m absent for a long time, it will impact my colleagues.”

Kim said he made the decision because playing in the championship is the reason he has pursued the sport.

Assistant coach Seok Min-ho, who teaches at a high school, got special permission.

“The founding philosophy of the school is patriotism,” Seok said. “When I said I’d be representing the country, the school’s chairman of the board gave me the approval.”

American football is considered the most popular sport in the United States. According to Nielsen, 114.4 million viewers watched the 2015 Super Bowl between New England Patriots and Seattle Seahawks.

On the other hand, the sport receives little attention from sports fans or media outlets in Korea.

Currently, 37 college teams and eight amateur teams compete in two separate leagues. The season lasts from September to December, and is followed by a championship between the two division leaders known as the “Kimchi Bowl.”

About 2,500 players are registered with KAFA, according to an official from the association.

The college teams are considered club sports rather than varsity, and most amateur teams are funded by the players. Jung said only a few teams are sponsored and that his team, the Seoul Vikings, lost its sponsorship this year.

Korea’s first attempt to enter the championship was in 2003, when Germany was the second host. But the effort ended bitterly, when Korea’s team lost to defending champion Japan 88-0 in the regional qualifiers.

Hong Dong-hyuck, a defensive coach who played on Korea’s team in 2003, said at that time, he believed it would not be possible to beat Japan.

“We did not have a well-organized system,” the coach said. “The coaching staff was unprepared, there were no trainers and our strategies were old-fashioned.”

Four year later, the team saw its second chance when Japan hosted the 2007 IFAF Senior World Championship. After defeating Australia in the regional qualifiers, Korea finally entered the competition. Though the team lost to Germany and the United States, it beat France 3-0 in its last game to finish fifth of six countries.

“I think it was a good thing we won that game,” Jung said, who is one of the few players on the current national team to have played in 2007.

He added that France was far superior to Korea, and his teammates were discouraged after losing their first two games back-to-back.

“We gave everything in that game to show the world how we could play,” he said.

This year, Korea aims to be in the top four.

The current team formed from 2013. All 45 players were selected through two tryouts, which drew about 250 players overall. The first was held in 2013, and the second last year.

According to Baek, the team has a high turnover because of complications with jobs or the cost of participating.

Of the 45 players on the team’s current roster, 35 to 40 percent are different from the original 2013 team.

The team can’t train often because its players are busy with work, so unlike other countries, they gather just once a month. Players voluntarily practice in the interim.

Despite the complications, the Korean footballers dedication to the sport has not been affected.

“I still have no clear reason [for why I stick with it],” said team captain Lee Dong-hwan.

“[But] I play American football because it is a kind of religion for me.”

The team will depart for the United States on Monday.