Writer speaks out on why he made plagiarism accusations

Writer speaks out on why he made plagiarism accusations 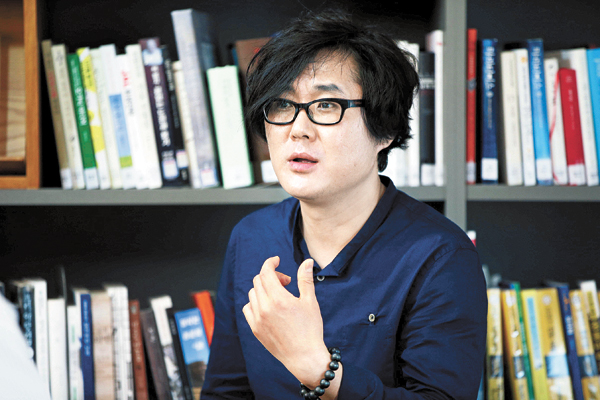 Korea’s literary set was shaken last week by a scandalous accusation against Shin Kyung-sook, a renowned novelist who is alleged to have plagiarized from “Patriotism” (1961) by Japanese author Yukio Mishima.

Controversy over the author’s integrity erupted after Lee Eung-jun, a writer, accused Shin of plagiarism on June 16 in an article featured in Huffington Post Korea.

Following its publication, he refused several requests from reporters for a face-to-face interview, then disconnecting himself from the outside world after Shin defended herself in the Kyunghyang Shinmun, a Seoul-based newspaper.

But now, for the first time since the scandal broke, Lee opened up to the JoongAng Ilbo, providing a detailed explanation on why he went after one of Korea’s most respected novelists.

“I decided to write the article with the hope of reforming several issues within Korea’s literary circle, leaving a record to provide proof of those problems, even if they can’t be solved at the moment,” he said. “This interview with the JoongAng Ilbo will be my first and last interview with the press.”

Q. What do you think about Shin’s response in the Kyunghyang Shinmun? In the report, she states, “I don’t even believe my own memory.”

A. The excerpts in Shin’s story that I tackled in my article for Huffington Post Korea were far beyond the normally accepted level of “literary use” [of another writers’ expressions].

As I said in the article, it’s acceptable in literary circles to use certain knowledge in a specific sector as background information for a story or to describe conversations between characters in a novel. That tactic is called “novelization.”

But Shin’s work, “Legend” (1996), is beyond that limit. In my article, I said Shin’s phrasing was just like “camouflage” - like she cut out a piece of another novelist’s work and pasted it in hers [but covered it up] just by decorating it with some shoddy patterns.”

That is conscious plagiarism. But she said [in her interview with the Kyunghyang Shinmun] that she doesn’t remember actively plagiarizing. If I accept that ambiguous excuse, it would be contradictory to what I previously said in my article.

Shin is still being criticized over social media, like Twitter, because she didn’t clearly define her position on the accusation. Many people have said that this is apparent plagiarism. Do you think what she did is, indeed, plagiarism?

What about Shin’s other work? Some critics have pointed out that her later novels, like “Somewhere a Phone Is Ringing for Me,” also seem to be plagiarized.

I will take responsibility for the expressions [in “Legend”] that I publicly tackled. Other excerpts can be judged by other writers and readers. I have enough stress now.

This is not the first time Shin has been accused of plagiarism. Even though “Somewhere a Phone Is Ringing for Me” (2010) has also come under fire for plagiarism, her later works since 2000 don’t appear to have been as heavily scrutinized as “Legend,” written in 1994.

Of course, it’s still a problem that her older novels have come under the microscope. But she may have not been so aware of the matter of plagiarism. Why do you think she has not properly responded to these criticisms so far?

I think she is such an influential figure in Korea’s literary circle that she didn’t imagine anyone would dare to tackle her previous books again. With such immense power, she just saw what she wanted to see and thought in a way she felt comfortable.

You say her power is “immense.” Do you think she has enough power to react how she has?

I initially tried to publish my article [accusing Shin of plagiarism] in a literary magazine, but I found it to be totally impossible, and I was really frustrated about that. This is the proof. If I had continued to push in that attempt, I would have been ridiculed in the literary circle.

Do you think there is indeed “power” in Korea’s literary industry? If so, what’s the main problem?

Of course there is. In the political arena, politicians draw huge public attention, so if there is a problem, it’s made known. But in the literary arena, the public is indifferent to what is happening. It’s something like a sacred place. Unreasonable incidents happen while the public knows nothing about it. The leaders in the holy land manipulate their own history and sell fake emotions disguised by delicate camouflage. The most frightening thing is that this arena turns literary critics into its pets, who merely wag their tails in front of the powerful people.

Can you give an example?

In terms of plagiarism, those in power have all covered up accusations regarding plagiarism.

When did you first hear about the suspicions surrounding Shin’s body of work?

It was around early 2000. I was really shocked [by the controversy].

Even if your accusations are true, questions still remain about why you separated yourself from Korea’s literary circle for the past 10 years and even abandoned your plans to produce a movie you’d been preparing for six months, only to then turn to attack Shin.

Why did you stick to criticizing her so much?

Before you ask me that question, you should ask me whether Korea’s literary circle will continue to be deceptive like this or change for the better. It’s almost suicidal to keep silent about all these issues.

There are many people around me who can vouch for just how much I pondered this matter over the past 10 years and how I’ve made efforts to solve these problems so far. I couldn’t postpone this anymore.

Shin, who is one of the most respected writers in Korea, apologized anyway, while the reputation of her publishing company, Changbi, was tarnished. Many readers are disappointed in Shin. Is this the result you wanted?

That’s a silly question. I just want the situation to change.

I never hoped for her to stop writing. As I do, I want every writer to be happy by writing good work.

What are you plans now?

I’m leaving the literary circle for a while - to a place very far from it. I will never attend any event where writers gather. I’ll continue to publish my work, but I will live like a total outcast.