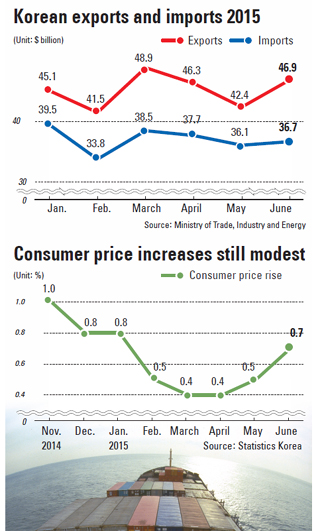 Low inflation and shrinking exports have been key factors that threaten to sink Korea’s economic growth below the government’s target of more than 3 percent.

According to Statistics Korea, consumer prices rose 0.7 percent in May year-on-year, dragged down by a 17 percent drop in global oil prices and a 20.9 percent decrease in household gas prices.

Since December 2014, consumer inflation has stayed between zero and 1 percent at annual rates, and hit its lowest point in 16 years in March, when the index stood at 0.4 percent.

Still, considering that the doubled price of cigarettes has raised overall inflation by 0.58 percent, prices effectively stayed above zero,

Over the past four months, the inflation rate hovered near zero and never topped 1 percent, raising concerns over a slump in domestic consumption. Given the spike in cigarette prices, many economists said inflation was effectively negative and raised additional concerns about deflation.

Officials said the outbreak of the deadly Middle East Respiratory Syndrome (MERS) virus had little impact on consumption in May, because the infection only began rocking the country’s psyche (and economy) in early June when the first death was confirmed.

Despite the low inflation, prices of some vegetables skyrocketed due to the weeks-long drought, the data showed.

Prices of agricultural and fishery products jumped 4.1 percent year-on-year on average. At the high end, the price of napa cabbage spiked 90.9 percent from a year ago, and the price of welsh onions surged 91.9 percent. White radishes also jumped in price by 34.3 percent, oriental melons - a favorite fruit for Koreans in the summer - surged 23.2 percent; garlic prices also climbed 21 percent.

The government believed, despite the months-long low inflation, that consumer prices would steadily rise in the second quarter of this year, along with a possible increase in global oil prices, a report released by Ministry of Strategy and Finance said Wednesday.

Still, there could be some variables like the Iranian nuclear negotiations or a natural disaster in the country during the summer monsoon season, the report added.

Exports and imports showed a decline for the sixth straight month.

According to the Ministry of Trade, Industry and Energy on Wednesday, the nation’s exports in June totaled $46.9 billion, a decline of 1.8 percent year-on-year.

The Trade Ministry explained that the shrinkage was smaller in June than May’s 10.9 percent, thanks to a slowdown of in the decline of oil prices.

By product, June exports of automobile, mobile phones and steel rebounded compared to May.

As the decline in the price of oil slowed in June, exports of Korean processed oil products and petrochemicals also slackened.

Korean oil products saw an average export decline of $2.3 billion every month during the first five months of this year, but only $1 billion in June. Sales of Korean automobile also rose slightly as new models began exporting.

However, the overall export decline has continued as slipping sales of semiconductors, ships, textiles and displays have offset the marketing success of other products.

Even though the decline of exports and imports has slowed for June, Korea’s trade situation still has not improved.

June trade recorded a surplus for the 41st straight month, this time a record high of $10.2 billion.

In Korea’s first-half trade, the nation’s surplus again broke records to post $46.7 billion, the Trade Ministry said, due to external economic factors like the depreciation of the yen and euro, the overall slowdown of global trade and the reduction of imports by China, Korea’s largest buyer.

The nation’s first-half exports recorded $269 billion, down 5 percent compared to the same period last year. This is the smallest since the first half of 2010, when exports totaled $245 billion.

This year’s first half showed the largest export decline since the first half of 2009, right after the Global Financial Crisis, when Korea saw a year-on-year drop of 23 percent.

The Trade Ministry forecast that the second half would bring improvements in both exports and imports, as new cars and mobile phones are scheduled to be released soon, and global memory chip and other computer parts markets are expected to expand.

However, as global economic uncertainties like the unstable eurozone economy and China’s continuing exports slowdown are expected to remain in the second half, the ministry said it would introduce some new export promotion policy packages later this month.