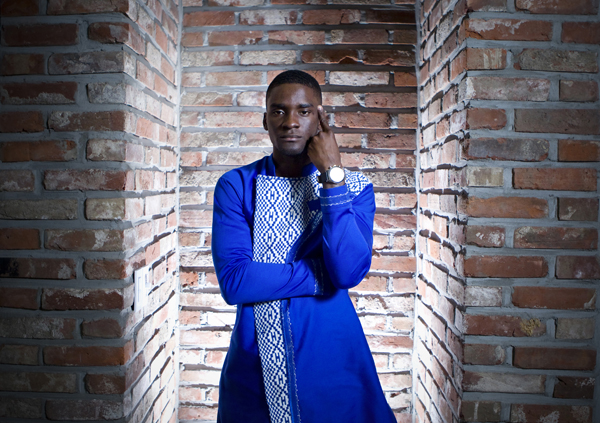 Sam Okyere, a Ghanaian TV personality in Korea, has now extended his field of activities onto the silver screen.

In the film, he somehow finds himself embroiled in a scheme to smuggle a bag containing an enormous amount of money. In the process, he gets assaulted multiple times.

“I have dreamed of becoming an actor for a long time, and my role model has been Will Smith,” he told the JoongAng Ilbo in a recent interview. “?‘Intimate Enemies’ was a golden opportunity for me.” Okyere’s determination certainly appealed to the director, and Im said he was also impressed by Okyere’s piercing eyes, which stood out in the audition.

But besides his admiration of acting, Okyere also wanted to take part in the movie so that more people could learn about the dire situation many migrant works in Korea find themselves in.

“The reality that these people face is quite cruel,” he told the newspaper interviewer. “I hope that at least the people who watch this movie can change their [bias] against them.”

As has been widely reported, Okyere came to Korea in 2009 after having been selected by the Korean government to learn computer engineering at Sogang University, with Korean government funding. He completed that program, graduating from the university last year.

According to his original plan, he would have gone back to Ghana last year, because he was going to stay in Korea only for five years. But life threw him a few surprises. He catapulted into stardom with his appearance on the JTBC talk show “Abnormal Summit.”

And this year is in fact his seventh year in Korea. “I am amazed by Koreans’ passion, advanced technology and diverse subcultures,” he said. “I’d like to absorb all that and spread them when I’m back in Ghana.”

It appears he is already somewhat an opinion leader for those Ghanaians interested in Korea and other cultures. He presides over a regular meeting of Ghanaian students living in Korea. His Facebook friends include about 500 Ghanaian youths who call Okyere their role model.

Most recently, he’s gotten involved in the “Orange Act” project initiated by World Vision aimed at building schools in Ghana.

And in his entertainment career, it seems that he will add “singer” to his resume soon. He plans to form a singing duo with Sam Hammington, a New Zealand-born Australian comedian in Korea.

The two, who are close friends, plan to release an album sometime within this month; it will include songs written and composed by Okyere.

The name of the duo, according to Okyere, will be Two Sam Place, reminiscent of the famous coffeehouse chain here, Twosome Place.

“Who knows? Maybe Twosome Place will sponsor our activities?” Okyere said with his iconic optimism that won the hearts of many Korean TV viewers.