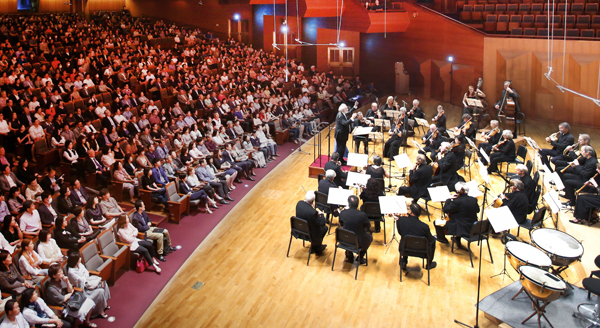 Hanwha Classic 2015, an annual classical music concert organized by Hanwha Group, was held last month at the Seoul Arts Center in southern Seoul, where the Orchestra of the 18th Century performed under the baton of Kenneth Montgomery. Provided by the company

The Hanwha Classic 2016 is currently set to kick off next March, Hanwha Group announced Wednesday.

The annual classical music concert, which the company has hosted since 2013, is considered part of its corporate social responsibility and provides Korean residents with the opportunity to enjoy some of the world’s most influential styles, including French Baroque.

Next year, French maestro Marc Minkowski, known for his creative interpretations of French Baroque works, will perform with his orchestra, Les Musiciens du Louvre Grenoble, which he founded in 1982.

Rameau’s Imaginary Symphony, Schubert’s Symphony No. 8 and music by Felix Mendelssohn are currently scheduled for next year’s program, which consists of three concerts in Seoul and Daejeon.

Over the past three years, Hanwha Classic has invited various groups to perform, starting with German instrumental ensemble Bach-Collegium Stuttgart, founded by Helmuth Rilling and Concerto Italiano and led by Rinaldo Alessandrini.

At this year’s event, held last month, the Orchestra of the 18th Century performed for nearly 4,000 spectators under the baton of Kenneth Montgomery in Seoul, Daejeon and Goyang in Gyeonggi.

Hanwha Group has been active in engaging and hosting art patronage programs, including Seoul Arts Center’s Symphony Festival and the 11 a.m. Concert.

The group also recently launched its Pop&Classic Trip program, in which concerts are presented in rural areas where cultural activities are limited.