‘Wild Pig’ KCIA chief turned on me and Park

‘Wild Pig’ KCIA chief turned on me and Park 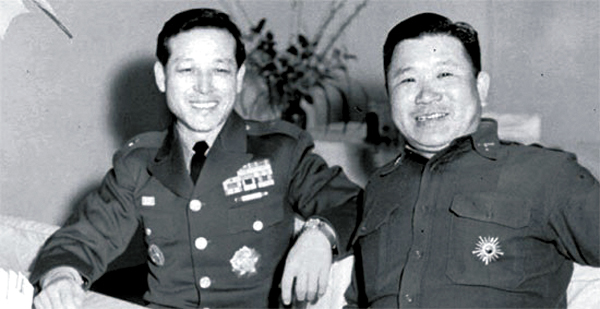 Kim Jong-pil, left, and Kim Hyung-wook pose for a picture during Kim Jong-pil’s discharge ceremony from the military on Jan. 7, 1963. [National Archives of Korea]

Of the many relationships I have formed with people in politics, Kim Sung-kon, Lee Hu-rak and Kim Hyung-wook did not have very cordial feelings toward me. Despite that, I recommended them to President Park Chung Hee for senior positions in the government. Kim Hyung-wook kept posing challenges to Park until he fled into exile to the United States in 1973 [Kim disappeared in Paris in 1979 and has never reappeared]. While Kim Sung-kon and I did have some conflicts, we found a way to reconcile during his last days before he died of an acute stroke in 1975.

In hindsight, I think it was Kim Hyung-wook’s peculiar personality that led him to challenge President Park after years of his service to him as the chief of the Korean Central Intelligence Agency (KCIA). Kim was preoccupied with the idea that he was powerful enough to outmaneuver Park. He was irrationally confident that he could siphon off his secret assets overseas or leak documents to American intelligence. After many warnings about Kim, Park decided to dismiss him from his dream job in 1969, right after Park amended the Constitution to seek a third term. Park must have thought Kim would try to bite him whenever he had a chance.

Kim’s personality was on full display whenever he played golf. When he bet money on a game, Kim would always employ tricks to improve his advantage. When the game was going in his favor, he would raise the bet unilaterally by a factor of two or three. When it appeared certain he would lose, Kim would have a subordinate come to him and say in an urgent tone, “The President is looking for you. You need to go right away sir.” And he would say, “Oh really? I have to go then, as the president needs me.” No one dared to call him out on this obvious deception. Kim’s nickname was “Wild Pig,” a reference to his looks. But he had skills to make the best out of others’ weaknesses. Before he fled to the U.S., he used to tell me, “People think I am slow and often don’t know what’s going on. But anyone who says such a thing clearly knows nothing about me.” 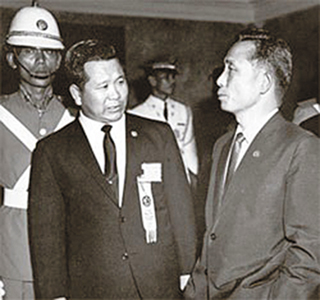 Born in Hwanghae Province in North Korea, Kim was my classmate at the military academy. While I was assigned to the intelligence bureau of the army headquarters upon graduation, Kim was assigned to a frontline unit as a platoon leader. I reunited with him in March 1960 - 11 years after I last saw him at the military academy graduation - when he was dispatched to the strategic bureau of the army headquarters.

Kim joined my cause in calling for the dismissal of top military officials who were corrupt. Kim was one of the very first group of military officials who sided with me. Until he was appointed the chief of the spy agency in July 1963, he displayed a high level of faith in me by always backing me up on major issues, including the military revolution [coup].

“I will always keep you from harm and if necessary, I’ll risk all I have,” he would say.

Kim’s steadfast support for me and Park, however, began to change as he tasted the sweetness of power as head of the KCIA. In an obvious sign of getting overly familiar with the privileges afforded to him in his powerful position, Kim became an arrogant person.

After he was ousted from the spy agency, his loyalty to President Park shifted to animosity and then to hatred to a point that he warned the Blue House that he would leak classified information, including about corruption at the highest level, to the United States during his exile in the early 1970s.

Going back to 1963, I was half forced and half volunteered to go into self-imposed exile in the middle of preparations to launch the Democratic Republican Party (DRP). My rivals lined up to fill my position. Kim Jae-chun, another graduate of the military academy, was at the forefront of the campaign against me. As third head of the KCIA, Kim wanted to break up the DRP in an apparent bid to push me from the political center. Kim took on the task of creating a new political party that was going to exclude those close to me. Overly confident, Kim aimed to create a party without Park’s approval, let alone his knowledge of it.

During those pivotal moments in 1963, it was Kim Hyung-wook who did his best to persuade Park Chung Hee to keep his faith in me and to keep supporting the DRP. Even when I was in exile overseas, Kim tried in earnest to maintain my political plans for Park and the DRP. While Kim Jae-chun was telling Park, then-chairman of the Supreme Council for National Reconstruction, to return to the military and hand power to a civilian government, Kim Hyung-wook was advising Park the opposite in line with my thoughts. On July 12, 1963, Park dismissed Kim Jae-chun as head of the KCIA and appointed Kim Hyung-wook to fill the post. It marked the beginning of Kim’s six-year reign at the KCIA.