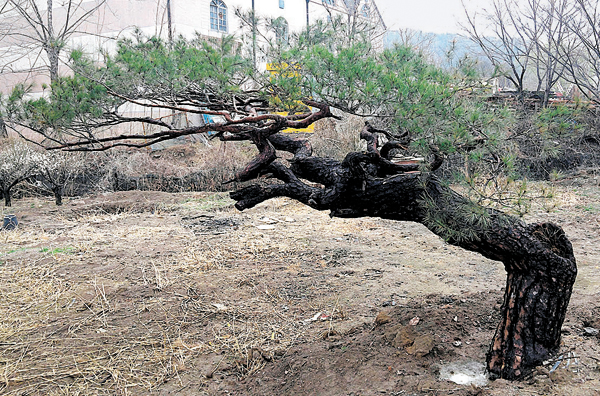 A pine tree shaped like a dragon’s head that was put up for 70 million won (62,589.10 dollars) by a stolen goods trader. Provided by Ulsan Nambu Police Precinct

Last March, in the middle of the night, four men stopped on the side of the road next to a mountain in Sangju, North Gyeongsang, where they quickly began clearing a path, cutting down the trees manually with handsaws for fear of getting caught.

After several nights, the four managed to create a path 3 meters (9.8 feet) wide and 300 meters long that led straight to two pines shaped like coiled snakes. The men dug up the trees carefully from the roots, and carried them away the following evening.

With some pines priced at 100 million won ($90,000) for their landscaping value, mountainous wooded areas nationwide have increasingly become targets for people looking to cash in on the trees’ monetary worth.

Once the trees were removed from their original locations, the four men replanted them elsewhere in secret and then sold them to landscapers and other interested parties.

Altogether, they stole 12 pines from various privately owned mountain properties before the beginning of June, when the Chungbuk Provincial Police Agency’s regional investigation unit received a tip about a ring of pine tree thieves and tracked them down.

“Eleven of the 12 trees that were stolen were sold for a total of more than 40 million won,” said Jeong Jin-yeong, who heads the investigation unit.

Though larger, more peculiarly shaped pine trees are usually the prime targets in such robberies, lately the thefts have expanded to include pine saplings, which can be raised and sold at a higher price upon maturation.

The driving force behind this activity is the housing market.

“As more apartment buildings are constructed, demand for pine trees for landscaping purposes will increase, so the general outlook is that the prices for pine trees will also increase,” said Han Tae-ho, who heads the architectural design team for Daelim, a major Korean construction company.

The use of pine trees in landscaping is unique to Korea. Koreans tend to move into new homes in the winter, before the beginning of a new academic semester. Because pine trees are able to withstand severe cold as well as are deciduous, keeping their needles in the winter, they make for good ornamentation in colder months, when other trees have lost their leaves.

But some pine tree robbery schemes are more long term. Thieves look for more expensive pines that are still growing and then cultivate them for over a year in their original locations.

This tactic, equivalent to a planned robbery, is exactly what one 51-year-old pine tree swindler, surnamed Kim, did last spring.

Kim, who chanced upon an ideal pine in the shape of a dragon’s head in 2011 in Ulsan, took care of the tree, providing it with nutrients, then dug it up two years later and sold it to a stolen goods trader for 30 million won.

Kim was arrested, and the trader, who was planning to sell the pine for 70 million won, was also apprehended while looking for potential buyers.

Still, such robberies are only likely to continue.

“Lately, fewer apartments are including parking lots, leaving more space for landscaping,” said Park Do-hwan, the deputy head of the architecture design department for GS Engineering & Construction. “As a result, the general trend is an increasing demand for pine trees.”