Plethora of plans to bounce back from MERS

Plethora of plans to bounce back from MERS 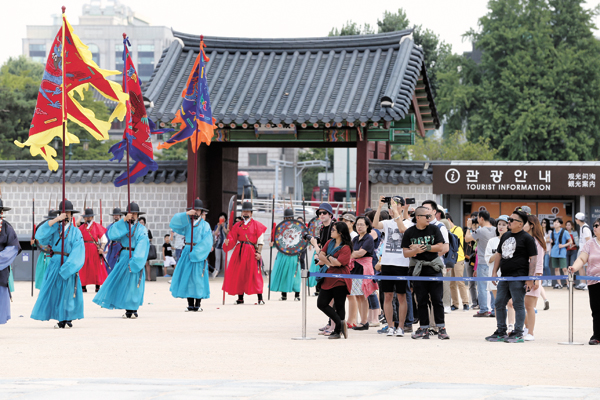 Tourists visit Gyeongbok Palace in central Seoul on Wednesday. The Cultural Heritage Administration announced Wednesday that it will be opening palaces and tombs of Joseon Dynasty royal families for free throughout July to attract visitors who stayed away due to Middle East respiratory syndrome. By Shin In-seop

With the outbreak of Middle East respiratory syndrome (MERS) coming to an end, the central and local governments are coming up with ways to help the depressed local economy recover, and companies are joining in.

Since Sunday, no more confirmed patients were reported for four consecutive days, leaving the total number of MERS cases in Korea at 182. The disease killed 33, resulting in a fatality rate of 18.1 percent as of Wednesday.

The Ministry of Health and Welfare is now focusing on containing the disease at the Hallym University Medical Center in eastern Seoul, where Patient No. 173 stayed until June 22, and Kaiser Hospital in Guri, Gyeonggi, where Patient No. 170 stayed until June 20. Quarantine measures for the two hospitals end on Monday for Hallym and Saturday for Kaiser.

When it comes to economic impact, the tourism industry was the most directly affected by MERS. According to the Korea Tourism Organization (KTO), the number of foreign tourists who cancelled trips to Korea was nearly 140,000 as of the end of June. It projects total losses of 120 billion won ($107 million) for the industry.

In an effort to bring tourists back to Korea, the Ministry of Justice Wednesday announced a comprehensive plan to make visas cheaper and more flexible. 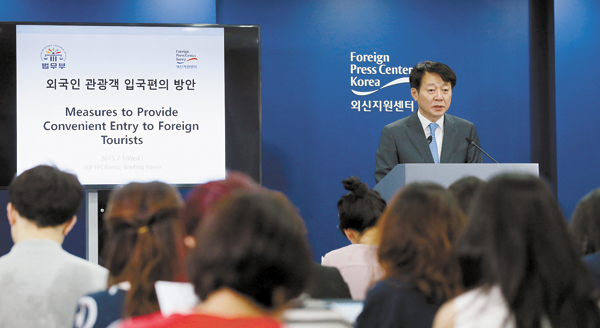 Kim Young-june, head of the Korea Immigration Service, explains various support measures to help the suffering tourism industry at a press conference on Wednesday. One of the measures includes waived fees on visa applications for tour groups until September.Provided by Korea Culture and Information Service

“We are waiving visa fees for tour groups from China until Sept. 30,” said Vice Justice Minister Kim Ju-hyun on Wednesday, “and the same benefit goes to group tours from four Southeast Asian Countries: Vietnam, the Philippines, Indonesia and Cambodia.”

Usually, individuals on group tours have to pay $15 for visas.

Plus, people who have been issued group tour visas for Japan may stay up to 15 days in Korea without getting visas. Last year, 1.1 million Chinese group tourists visited Japan but transferred in Korea.

“These measures will make it more convenient for foreigners to visit Korea, which will lessen the country’s worries over the depressed tourism industry,” Kim said. “We expect it to revitalize not just the tourism industry but the entire economy.” 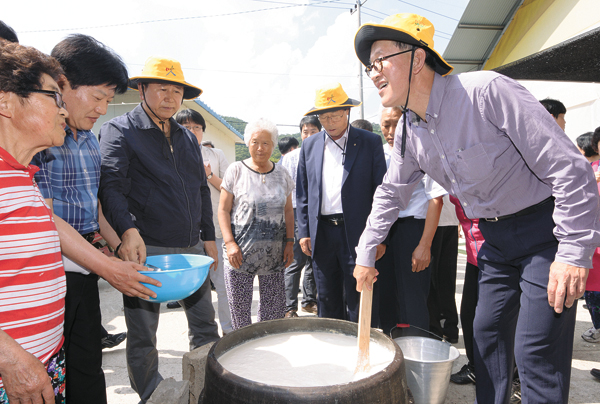 GS Group Chairman and Federation of Korean Industries Chairman Huh Chang-soo, right, makes tofu at a farm in Yangpyeong County, Gyeonggi, on Wednesday as part of the business lobbying group’s campaign to help farms that have been affected by MERS and recent drought.[NEWSIS]

Seoul Mayor Park Won-soon also emphasized Wednesday that one of the most urgent issues regarding the fatal respiratory disease is to attract foreign tourists again, especially considering the Seoul Metropolitan Government’s goal of hosting 20 million foreign tourists a year.

Seoul is the biggest tourist destination in Korea for foreign visitors. According to KTO, more than 12.3 million foreign tourists visited Korea in 2014 and 80.4 percent of them paid visits to Seoul.

“In order to overcome the crisis, we will do our best to bring back foreign tourists by working with travel agencies, accommodation businesses, restaurants and shopping centers,” Park said in remark to celebrate the first anniversary of his second term as mayor. “We are already preparing advertisements in China, Hong Kong and Southeast Asia and putting in more than 10 billion won. I’m also considering going to those countries for promotions or special events.”

The city government thinks that attracting 20 million foreign tourists a year would be the equivalent of creating 420,000 new jobs and 22 trillion won of added value to the local economy.

“I won’t even hesitate to become a tour guide if Seoul can reclaim its reputation as a tourist attraction and achieve the goal of attracting 20 million tourists a year,” Park said.

Four major palaces in Seoul - Gyeongbok, Changdeok, Changgyeong and Deoksu palaces - as well as Jongmyo Shrine and the royal tombs of Joseon Dynasty, are allowing free entry for all of July, which is also in an effort to encourage local people come out and leave behind any fears of the disease.

“I’ve heard that rural regions are going through a tough summer as numbers of tourists have shrunk after the MERS outbreak and because of a drought that makes irrigation difficult,” Huh said. “Like we did today, I hope some company workers in the cities spend their vacations in rural areas.” 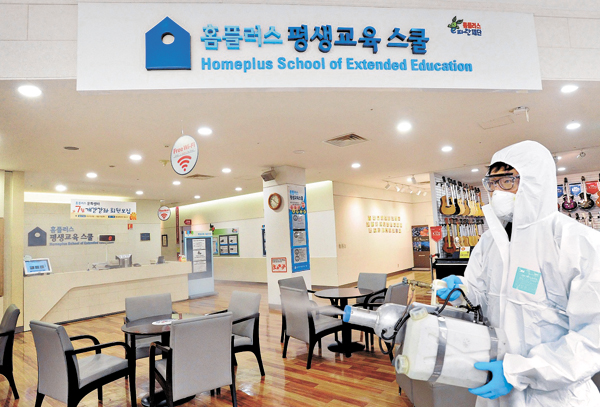 An employee of a fumigation company cleans a Homeplus culture center at the retailer’s branch in North Suwon, Gyeonggi. The 124 culture centers of Homeplus have been closed since June due to MERS.Provided by Homeplus

The FKI distributed letters to some 10,000 member companies to set up partnerships with rural villages and encourage their employees to spend summer vacation in the village the employer is supporting.

The Korea Chamber of Commerce and Industry (KCCI) on Wednesday said it and some 71 regional chambers of commerce nationwide will launch a campaign to encourage member companies to let their employees take vacation in July and August, two months that are expected to be lean for the services and tourism industries after mass cancellations by foreign tourists.

The KCCI and its member chambers of commerce urged its 150,000 members to expand their corporate spending by buying famous products from each region.

Hit by the frail economy and outbreak of MERS, local discount retailers are making visible efforts to revive consumers’ appetites.

Shinsegae’s experiment with Emarttown, which brings together a warehouse retailer, electronics shop and home improvement store, is seeing early success.

During its first 12 days since the opening, Emarttown had seen 14.5 billion won in sales, 20 percent higher than its initial target. Opening day sales were also 68 percent above the company’s target.

Consumer studies showed that Emarttown was drawing customers from not only the nearby area of Ilsan, Gyeonggi, an area heavily populated with young families and single-person households, but also from distant areas.

On its first day of opening, 45.1 percent of the customers came from areas within a 3-kilometer (1.9-mile) radius. But by the weekend, 41.2 percent of its customers had come from more than 10 kilometers away.

“We are seeing more of our shoppers visiting us after becoming interested through word of mouth and reviews on social networking sites,” an E-mart official said.

“Emarttown has proven that a discount retailer can be recreated as a place for both shopping and cultural experiences,” said Lee Gap-su, CEO of E-mart.

“We will continue to offer high quality products and interesting content,” Lee added.

Meanwhile, Lotte Mart is holding a big sales event amid signs that consumer sentiment may be recovering as fears of MERS wane.

The scope of the sale will be extensive, according to Lotte, and it is also offering multiple discount options that can be used simultaneously.

Items on sale include food, household staples and clothes.