Universiade kicks off in ‘city of light’

Universiade kicks off in ‘city of light’ 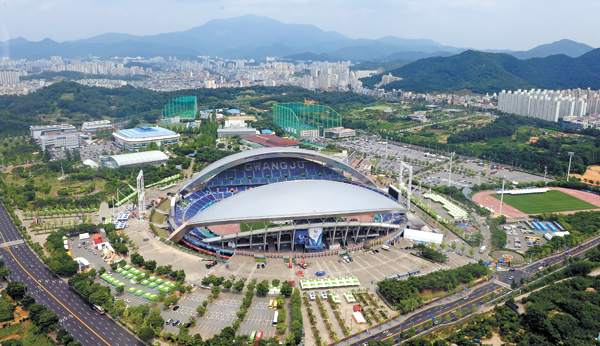 The 2015 Gwangju Summer Universiade starts its 12-day journey Friday, with Korea aiming for a top-three finish at the worldwide university athletics tournament.

Entering its 28th edition, this Universiade is the largest in the event’s 56-year-old history by number of participants. The organizers said 13,182 athletes and officials from 148 countries have registered as of Tuesday.

At the last event in Kazan, Russia, 11,759 athletes and officials from 162 countries participated.

The outbreak of Middle East respiratory syndrome (MERS) last month led to concerns about the competition’s safety, but the organizers said they are confident there will be no problems.

They added that they hope the biennial event will increase the visibility of both Gwangju and the nation.

The games’ slogan is “Light Up Tomorrow,” a nod to Gwangju’s name, which translates to “city of light.”

The organizers said the opening ceremony will emphasize light, and will be held at the Gwangju Main Stadium (World Cup Stadium) 7 p.m. tonight.

Titled “U are Shining,” the ceremony will run for 200 minutes and showcase Korea’s traditional culture alongside global trends.

“After six years of preparation, we are thrilled and have high hopes for the opening,” said Yoon Jang-hyun, Gwangju mayor and chief of the organizing committee.

“We will successfully host the event with our citizens to raise the status of the nation, making it an opportunity to overcome difficulties in this country as well as show the power of Korea.”

The Universiade, a portmanteau of “university” and “olympiad,” is organized by the International University Sports Federation and aims to add to college students’ education, as well as help them build friendships and develop a sense of sportsmanship.

To be eligible to participate, athletes should be undergraduate or graduate students between the ages of 17 and 28 as of January 1 the year the Universiade is being held, or have graduated in the year immediately preceding the event’s year.

In the Gwangju Universiade, a total of 272 gold medals are up for grabs in 21 sports. Thirteen of those are predetermined by the games - athletics, basketball, fencing, football, artistic gymnastics, rhythmic gymnastics, judo, swimming, diving, water polo, table tennis, tennis and volleyball. The rest are chosen by the host nation, in this case golf, badminton, shooting, baseball, archery, rowing, taekwondo and handball.

Athletics - or track and field - has the most gold medals available with 50, followed by swimming with 42.

Water polo is the only sport that will be played every day until July 14, the last day of the Universiade.

Korea’s all-time gold medal record is 28, at the 2011 Universiade. This time around, the host nation is aiming to collect 25 golds. By sport, the Korean Olympic Committee expects five gold medals each from archery, taekwondo and judo, and four each from shooting and badminton.

“Our biggest competitor will be Japan,” said Yoo Byung-jin, chairman of the Korea University Sports Board and chief of the Korean delegation at the Universiade.

“We will retain the top-three position.”

As the host nation, Korea is sending 553 athletes and coaches, its largest-ever delegation for the competition. Overall, Korea’s is the fifth-largest delegation. Defending champion Russia is sending the most, at 927, followed by Japan (679), China (611) and the United States (605).

Russia, which swept 156 of 353 gold medals in the last Summer Universiade, is again considered the favorite this time around.

The United States hasn’t topped the Summer Universiade since 1999, but is expected to draw attention with its basketball team, which is represented by three-time NCAA champion University of Kansas.

The organizers said they’ve saved nearly 200 billion won ($178 million) since only three facilities were newly built, while the other 62 venues are existing facilities that underwent minor maintenance and renovations.

The only competition venue outside of Gwangju and the Jeolla region is the Chungju Tangeum Lake International Regatta Course in North Chungcheong.

Among the new facilities, the Nambu University International Aquatics Center represents the latest in swimming pool technology, with country-first features like an adjustable water depth system.

The facility will also be used for the World Aquatics Championships in 2019.

The organizer said the Kwangju Women’s University Universiade Gymnasium was designed to hold exhibitions and concerts after the Universiade, while some parts of the Gwangju International Archery Center will be used as public football fields after the games.

All venues will offer free Wi-Fi, and the organizers say the games will also include various educational programs and forums for the university students.

The organizers added that the World Youth Festival, an event to facilitate cultural exchange among young people, will also be held from July 4 to 13 at the Asian Culture Complex Plaza and Geumnamro.