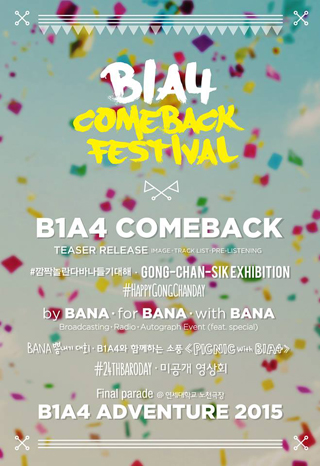 Boy band B1A4 has confirmed their comeback in August, according to the group’s talent agency WM Entertainment on Thursday.

The five-member band released two posters that imply their comeback through their official website and SNS on the same day. While one poster says, “B1A4 COMEBACK FESTIVAL,” the other image reads, “B1A4’s comeback festival will be enjoyed with the boy group’s fans from the beginning to the end.”

Since they released their last single, “Solo Day,” last July, their upcoming album marks a year out of the spotlight.

“The male act is preparing diverse programs based on their new record such as outdoor concerts,” said a person from the group’s entertainment agency.

“They have also prepared surprise events for their fans, who had to wait for the boy act’s new record for such a long time. Currently, every member is putting forward his best effort to perform better on the upcoming music.”