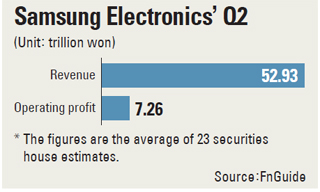 The country’s two largest tech giants, Samsung Electronics and LG Electronics, are forecast to post modest profits for the second quarter as sales of the companies’ flagship smartphones fell short of expectations.

Analysts have lowered their earnings estimates for the two companies ahead of Samsung Electronics’ planned guidance announcement on Tuesday.

Samsung is expected to record 7.26 trillion won ($6.45 billion) in operating profit for the April-June period, up 0.97 percent from the same period last year, according to market tracker FnGuide. The estimate is the average of figures offered by 23 brokerage firms.

The earnings outlook indicates a recovery from much worse previous quarters, but isn’t close to where the market expected the company to be.

Entering this year, rosy prospects were seen for Samsung’s second quarter with the much-anticipated Galaxy S6 series set to hit shelves in April. IBK Securities issued a profit forecast of 8.29 trillion won three months ago. IBK has trimmed the estimate to 7.03 trillion won.

“For now, Samsung doesn’t have any new technology or releases that can drive global demand,” said Lee Seung-woo, an analyst from IBK.

In the premium phone market segment, Apple’s iPhone 6 and the larger iPhone 6 Plus proved to be huge hits, sucking up the high-end smartphone users.

Market research firms recently predicted that Samsung Electronics sales would come in between 45 million and 50 million won, lower than earlier estimates of anywhere from 50 million to 70 million won.

On Samsung’s home turf, sales are said to be particularly disappointing due to a government regulation that limits the amount of subsidies telecom companies can give on sales of phones.

But the second quarter is not all bleak.

Some including IBK and NH Investment and Securities said that strong demand for memory chips used in mobile devices will offset the declining DRAM prices and prevent overall revenues and profits from falling too sharply.

Concerns for the second quarter are reflected in the stock market as LG Electronics shares plummeted to lower than 50,000 won on June 25 for the first time in eight years.