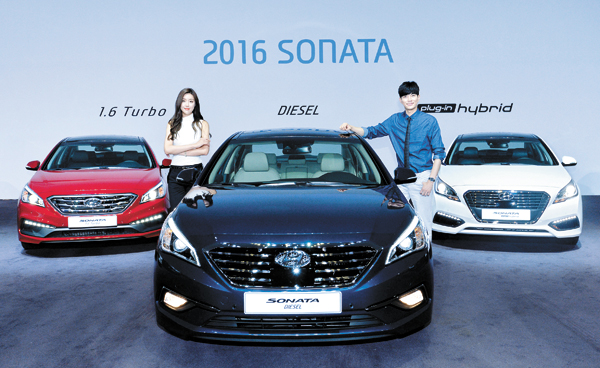 Hyundai Motor introduces new models of its flagship Sonata sedan at a ceremony held at the Floating Island in Banpo, southern Seoul, on Thursday. [NEWSIS]

Hyundai Motor expanded the lineup of its all-time best selling model, the Sonata sedan, hoping to attract younger customers and overcome a recent slump in sales.

The nation’s leading automaker announced Thursday that the lineup of four different Sonatas has been expanded to seven with three brand new models: a 1.7-liter diesel, a 1.6-liter turbo and a plug-in hybrid. Those are supposed to appeal to consumers in their 20s and 30s who are smitten with German imports by Volkswagen, BMW, Audi and Mercedes-Benz.

With the three new models, the company also rolled out the 2016 editions of the previous four Sonatas: the 2.0 CVVL, 2.0 Turbo, a hybrid, and LPi with some upgrades in driving performance and safety options.

By discontinuing the 2.4 GDI Sonata, the company said it is following the international trend of reducing engine outputs. That’s why two of the new models have a 1.7-liter diesel engine and a 1.6-liter Turbo engine. Those two new power trains were combined with a seven-speed double clutch transmission (DCT) for competitive driving performance and fuel efficiency.

The turbo engine is a huge change for Hyundai Motor. It has never had an engine displacement of 1.6 liters for the Sonata since it was introduced in 1985. The combination of the turbo engine and the DCT provides 180 horsepower and 27 kilogram-meter of torque with a fuel efficiency of 13.4 kilometers per liter. The turbo model is offered in three trims: the Style for 24.1 million won ($21,420), the Smart (26.9 million won) and Smart Special (29.5 million won).

“Basically we tried to provide a car with a smaller than 2.0-liter engine while offering better fuel efficiency and driving power to satisfy young consumers,” Hwang Kwan-sik, spokesman of Hyundai Motor told the Korea JoongAng Daily. “People worry that it could compete with our own compact models [like Avante], but drivers seeking a Sonata want a bigger size than a compact with better efficiency. Many young Korean consumers hesitating to buy a Sonata because of its engine size and we thought these new turbo and diesel models could resolve such worries. We also expect these two compact models to attract drivers considering imports, many of which are compact cars like [Volkswagen’s Golf].”

The company has unveiled the 1.7-liter diesel to respond to the growing popularity of diesel sedans, currently led by German automakers. The company sells a diesel model of the large Grandeur sedan, but that has not been a popular option for young drivers attracted to 2.0-liter diesel engine models such as Audi’s A4 and the BMW 3 Series.

Combining the U2 1.7-liter engine with the seven-speed DCT, the car offers 141 horsepower and 34.7 kilometers of torque with a fuel efficiency of 16.8 kilometers per liter. The model is offered in three trims; the Style (24.95 million won), the Smart (27.8 million won) and the Smart Special (29.5 million won).

The company also introduced the Sonata plug-in electric vehicle (PHEV), which is the company’s first PHEV and the first by Korean automakers. This PHEV was developed under the leadership of Vice Chairman Chung Eui-sun, the son of Hyundai Motor Group Chairman Chung Mong-koo. The company jumped into the environmentally friendly car market and focused on developing hybrid cars and introduced a series of hybrid models: the Avante, Sonata and Grandeur. Hyundai’s sister company Kia Motors also introduced hybrid models - the Forte, K5 and K7 - but they weren’t popular.

Global automakers competed to introduce plug-in models, which combined electric car and hybrid car features. Chung followed the trend, unveiling the Sonata PHEV at the Detroit Motor Show in the U.S. in January. According to car market research firms B3 and IHS, the world’s PHEV market is expected to grow from 2014’s 100,000 units to 1.7 million units by 2020.

While using the electric motor only, the car can travel up to 44 kilometers. In hybrid mode, the car provides 17.2 kilometers of fuel efficiency and 4.6 kilometers per kilowatt-hour in the electric mode. The PHEV offers some convenient options like an 8-inch smart navigation system and a SMS service that sends a text message to a driver when the charging is done. The PHEV comes in two trims: Premium (39.95 million won) and Exclusive (42.6 million won).

One bit of bad news for Sonata PHEV fans is that they will not able to receive a government subsidy this year since details about the regulations hasn’t yet been determined by the Ministry of Environment.

“We worry about that, but we decided to roll out the PHEV to claim the leading position in the green car segment,” said Hwang, the Hyundai spokesman. “It is [5 million to 8 million won] more expensive than other hybrid vehicles being sold in the country, but we will offer a portion of the government subsidy [which is expected to be between 5 million won to 6 million won] to attract consumers.”