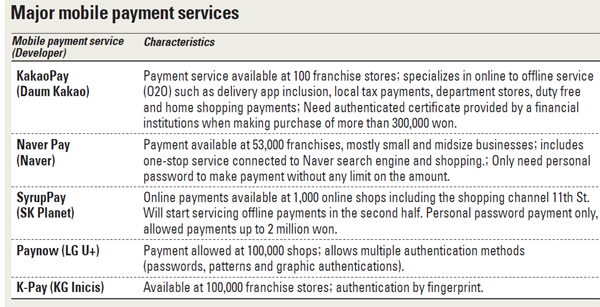 The battle for possession of first place in the mobile payment services is on. The nation’s IT giants Naver and Daum Kakao have squared off, and Naver continues to hold the lead in market share among Korea’s web portals and search engines; Daum Kakao continues to dominate Korea’s mobile messenger services. The two companies have been competing ferociously in IT software businesses, but that battle has now moved into mobile financial businesses; Naver launched a mobile payments service, Naver Pay on June 25. Daum Kakao has been operating its KakaoPay since last September.

Both Naver Pay and KakaoPay aren’t much different from other mobile payment services: Users access their payment service by entering information about their credit cards on their smartphones. But the two services are different in the way they are marketed and the way they are serviced. The difference clearly shows the distinctive values of each company as well as their founding backgrounds.

The marketing focus of Naver Pay is convenience. To get information about purchasing the product or service, a user only needs to log in on Naver’s website.

Anyone who has an ID on the web portal can search and purchase goods and services from 53,000 businesses who have contracted with Naver just by logging into at that portal, whether on a computer or a mobile device, without having to set up an additional membership with the stores that they are using. The connections are also very strong; if a user searches for “plum” on the Naver search engine, the results include a link to the shopping mall called “Plum” that uses Naver Pay. Naver also handles inquires about purchase delivery. Naver Pay allows payments to be purchased with credit cards or with cash transfers from their bank accounts. All the users are required to do is to punch in a six-digit password when making a payment, and therefore don’t need to use an authentication certificate provided by a financial institution. 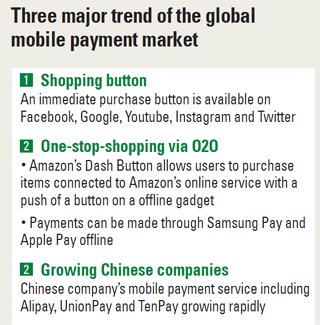 The only problem is the smaller number of financial companies that have contracts with Naver Pay; KakaoPay is well ahead. Only three credit card companies and five banks can be used on Naver Pay, with two more credit card issuers scheduled to join.

Additionally most stores that have a contract with Naver are small and midsize businesses and small office-home office shops.

“We will provide convenient one-stop payment services by cooperating with many more big partners,” a Naver spokesman said.

Compared to Naver Pay, its rival KakaoPay is much smaller in the number of companies that have contracts with its mobile payment service. Only about 100 businesses are affiliated. But while the number is small, most of these shops are large, popular shopping malls with a huge following. Popular delivery apps like Baedal Minjok or Yogiyo, online tax-free shops and department stores are affiliated with KakaoPay, and people can also pay their utility bills using the Kakao service. Because the mobile messenger platform KakaoTalk already has 38 million users, KakaoPay drew 4.4 million users, making it the largest among domestic easy payment services.

Unlike Naver, KakaoPay doesn’t share a single ID with the stores, so users have to sign up separately at the shops or the apps they are using in order to make a purchase. Additionally, when the payment exceeds 300,000 won ($267), users have to verify themselves through their authentication certificate.

“We will discuss with card companies as soon as possible how to eliminate the 300,000 won limit,” a spokesman at Daum Kakao said.

Other companies that provide mobile payment services are watching closely as the competition continues to heat up. Social commerce sites and many other open markets use their own payment systems and have discount promotions such as a 5,000 won discount on purchases of more than 10,000 won.

Competition from foreign companies is also heating the market. China’s Alibaba is in the process of working of launching an AliPay version for Korea, called Korea Pay, in the second half of this year.

“Within a year only few will survive and the rest will disappear,” said an official at a payment gateway company, a specialist in online credit card payment authorizations.

While Korea’s mobile payment industry is still in its early stages, the global market is already moving to blur the line between services, shopping and payments. Major IT companies have set their sights on one-stop shopping.

One example is Amazon’s Dash Button. This is an actual physical button in the shape of a USB drive. Instant product ordering and payment is made simply by clicking on the button while it is attached to the device. Popular internet service companies like Google, Facebook, Instagram, and Twitter are moving to include “buy now” buttons on their websites.