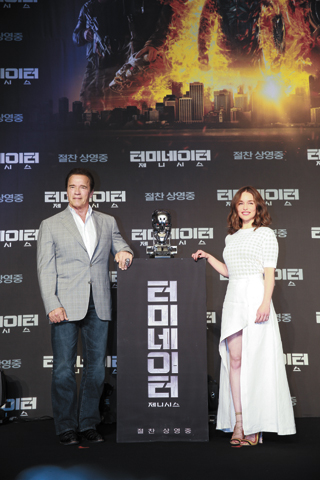 Arnold Schwarzenegger, left, and Emilia Clarke pose for a photo after holding a press conference for “Terminator Genisys” on Thursday at the Ritz Carlton Hotel in southern Seoul. Provided by the distributor

Arnold Schwarzenegger is back in the game for the fifth installment of the “Terminator” series.

The 67-year-old actor and former politician arrived in Korea on Wednesday with on-screen partner Emilia Clarke to promote their latest project, “Terminator Genisys,” directed by Alan Taylor, just in time for its release here.

“All the Terminator movies that I have done always have been really great for my career, and I enjoy playing the character because it is such an interesting one to play - a machine that has a human element to it,” Schwarzenegger said about his affection for the franchise during a press conference Thursday at the Ritz Carlton Hotel in southern Seoul.

The former California governor last visited the peninsula in 2013, when he came to promote Kim Ji-woon’s “Last Stand.”

A reboot of director James Cameron’s first two “Terminator” installments, “Genisys” starts off in 2029 in a world that has been taken over by the machines under the self-aware artificial intelligence system Skynet.

As the leader of the remaining human resistance, John Conner (Jason Clarke) is on the verge of taking down the movie’s antagonistic robotic empire when he discovers that Skynet has sent its subordinates back in time to kill his mother, Sarah Conner (Emilia Clarke).

But when Sgt. Kyle Reese (Jai Courtney) is dispatched back to 1984 to save her and reset the future, he arrives to find that Sarah was waiting for him all along with her longtime guardian Terminator, or T-800 (Schwarzenegger), who has protected her since childhood.

From there, the trio fights a fierce battle against Skynet in a desperate effort to prevent Judgement Day.

“I think people like futuristic and sci-fi movies,” Schwarzenegger said about the franchise’s lasting popularity. “[Time traveling] is a smart concept for an interesting movie. Also, I think they like the idea of a machine that has ultimate power and [can be] destructive. People were fascinated by these features, which is why they keep coming back for it.”

He added that when he first received the script, he felt as if he was “over the moon,” surprised by just how far the story line could go to encompass “suspense, surprises, emotional roller coasters and action.”

As audiences might expect, Schwarzenegger’s T-800 is no longer the ultimate symbol of power, as in the first two franchises, coming across a stronger, more villainous robot.

However, like the symbolic line “I am old, but not obsolete,” which the old Terminator repeats in the film, Schwarzenegger said he values getting older.

“Like wine, old cigars and cars, there are some things that get better as they age,” he said. “I think that line worked very well with the Terminator. It was an appropriate line, and I loved delivering it.”

Meanwhile, Emilia Clarke, who rose to fame through the hit HBO series “Game of Thrones,” admitted that she felt the pressure in playing Sarah Conner, portrayed by Linda Hamilton in the first two installments.

“I definitely felt a huge amount of pressure going into this film,” she said.

“However, one of the biggest reasons why I wanted to take on this role was because of the iconic-ness that Linda Hamilton created in the first two movies,” she continued, adding that the role was a “double-edged sword.”

The actress also revealed what it was like to work with Korean actor Lee Byung-hun, who appears in the first half of the movie as T-1000, a deadly shape-shifting robot.

“He was incredible to work with. There was no need to put in extra special effects for the movements that he actually had. I spent a lot of time just watching him,” Clarke said.