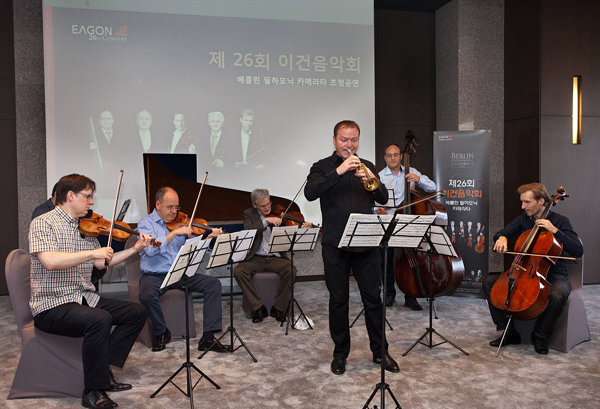 It’s not surprising to see companies that have nothing to do with art or music organizing art exhibitions or classical concerts as part of their corporate social responsibility. But if the company has been doing it every year for the past 26 years, it deserves substantial credit.

Eagon, a local building material supplier, has been holding annual classical concerts since 1990 and inviting international musicians to Korea in an effort to allow Koreans, regardless of their social status, to enjoy classical music. Thanks to the company’s effort, Koreans were able to enjoy renowned musicians, starting with the Academia Wind Quintet Prague from the Czech Republic in 1990, to more recent performances by the Brass Ensemble and the Wind Quintet of the Berlin Philharmonic Orchestra. Tickets for the Eagon concerts are not for sale, but can be applied for via its blog (http://eagonblog.com).

They are, of course, free of charge.

This year, the Berlin Philharmonic Camerata, which is a chamber orchestra composed of string players from the main orchestra, has been invited to hold seven concerts in five cities across the country. It started with Incheon on Thursday, followed by tonight’s concert in Goyang, Gyeonggi. There are two performances on Saturday at 2 p.m. and 8 p.m. at the Seoul Arts Center in southern Seoul. Then the group will move to Daegu and Busan. While they stay in Korea, the musicians also hold master class programs with Korean students in culturally isolated regions.

In Korea, the musicians will perform with Berlin Philharmonic Orchestra trumpeter Gabor Tarkovi and Christian Rieger, who plays the harpsichord.

The program focuses on baroque music, including Tartini’s Trumpet Concerto in D major, Vivaldi’s Concerto for Strings and Continuo in G major, Bach’s Harpsichord Concerto in A major and Handel’s Wassermusik Suite No. 2 in D major.