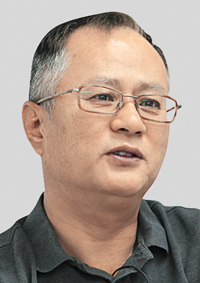 Pocog started an open recruitment earlier this year in the hopes of finding a suitable director for the opening and closing ceremonies of the 2018 Winter Games, but had difficulty finding an appropriate candidate.

It added that an advising committee had recently screened all potential candidates, even those who did not officially apply, and reviewed their qualifications before the final contender interviewed with Cho Yang-ho, the organizer’s head.

“We wanted an executive creative director who was both creative and capable of coordinating the various aspects required to stage a world-class performance,” Pocog said in a statement. “In addition to Song’s experience and creative achievements, his strong understanding of the audience and broadcasting, his wide network within the creative arts industry and his ability to manage big projects and organizations are essential qualities that Pocog benchmarked for the position.”

Song is currently the CEO and executive artistic director of PMC Production, as well as the dean of the College of Convergence Culture and Arts at Sungshin Women’s University in Seoul. The 58-year-old started his career as an actor in both theater and television, but later gained immense success as a producer and director in 1997 after introducing non-verbal performance “Nanta,” seen by more than 10 million people worldwide.

The performance, which tells the story of four chefs and utilizes various kitchen utensils as percussion instruments, made its international debut at the 1999 Edinburgh Festival Fringe, where it received the award for best performance.

“It is a great honor [to be named] executive creative director for the 2018 Olympic Games’ ceremonies,” Song said in a statement. “I will put forth my best effort to orchestrate exciting and memorable ceremonies.”