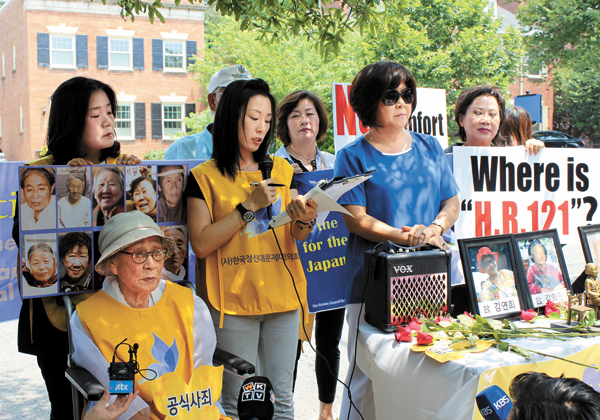 A rally demanding an apology from Tokyo for its sexual enslavement of women and girls during World War II was held on Wednesday in front of the Japanese Embassy in Washington for the first time, led by victim Kim Bok-dong, 89. By Chae Byung-gun

A “Wednesday demonstration” to demand an apology from Tokyo to the thousands of women forcibly recruited into Japanese military brothels during World War II was held in front of the Japanese Embassy in Washington for the first time, and was led by a victim.

Organized with the support of Korean and Washington-based civic organizations, dozens of protesters demanded justice for the women, euphemistically referred to as “comfort women.”

“You cannot claim ignorance that children were tricked and dragged away to live as slaves,” said 89-year-old Kim Bok-dong, one of the Imperial Japanese Army’s victims, who was forced into sexual slavery during the war.

Kim has become an active voice on the issue and an advocate for women’s rights, as well as stood before the Japanese Embassy on Wednesday to urge Prime Minister Shinzo Abe to issue an official apology to the countless women forced into sexual slavery.

“Before I die, the Abe administration needs to clearly settle what Japan has done in the past,” she said.

The Korean Council for the Women Drafted for Military Sexual Slavery by Japan has held weekly Wednesday rallies demanding a resolution to the issue since January 1992, usually in front of the Japanese Embassy in central Seoul, where the surviving victims participate.

This marks the 1,185th rally of its kind, but the first time comfort women victims have gathered in the U.S. capital to rally their cause.

The rally was co-organized by the Washington Coalition for Comfort Women Issues, founded in 1992.

The protesters could be heard chanting “Justice!” and “Right now!” in demanding the Japanese government acknowledge and take responsibility for its forceful recruitment of tens of thousands of girls and young women.

“Holding the Wednesday demonstration in front of the Japanese Embassy in Washington is our request to resolve the issue together with the international community,” said Yoon Mi-hyang, the president of the council.

Kim also spoke earlier in the week at George Washington University to share her story, emphasizing the importance of preventing history from repeating itself.

Similar demonstrations, organized by local activists, are expected to be held in major U.S. cities with Japanese consulate offices.