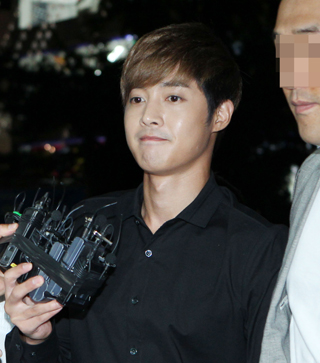 The ex-girlfriend of actor Kim Hyun-joong is scheduled to deliver his child in September, several Korean media outlets reported on Friday.
“It has been confirmed that she is pregnant; the doctor wrote an official diagnosis of the pregnancy. However, the baby has not been confirmed as Kim’s because DNA testing has not yet been conducted,” the 29-year-old’s attorney said.
On June 22, a sonogram of the fetus was broadcast on TV Channel A.
“Even though the sonogram was shown [on television], there are several factors that make her pregnancy suspicious,” Kim’s legal representative said.
Kim’s side has requested that the woman, whose name has not been disclosed, hand over the sonogram so that they can determine how long she has been carrying the child [to confirm her due date].
If the child is his, “Kim is willing to take full responsibility as a father,” the attorney added.
The actor found himself embroiled in controversy when his ex-girlfriend, who was allegedly pregnant with his child, filed charges against him for domestic violence in April, which she claims resulted in a miscarriage last year.
The woman requested 1.6 million won ($1,450,000) in damages.
Kim’s ex-girlfriend has claimed that she became pregnant with the current child after the two reunited later last year.
The trial for their case is set for July 22.
Kim is currently serving mandatory military duty. He enlisted in May and will continue until February 2017.