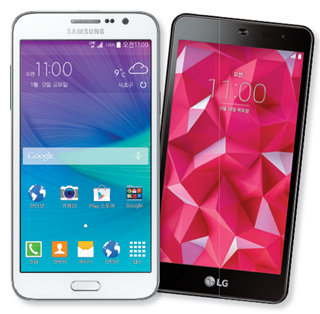 Purchasing a premium smartphone used to be a no-brainer for Korean consumers, who benefitted from the hefty subsidies telecom companies provided to lure new users.

In 2012, sales of high-end smartphones costing more than 800,000 won ($713) accounted for 96 percent of the 10 best-selling devices, according to Digieco, KT’s economic research institute.

But the days when consumers could freely choose a top-of-the-line device are long gone, following a government regulation limiting subsidies to 330,000 won.

The regulation caused people to shy away from expensive phones, creating a sharp decline in the premium market.

High-end devices accounted for 70 percent of the smartphone market in the first quarter last year, but the figure dropped to between 30 and 40 percent during this year’s first quarter, according to tech industry sources cited by Yonhap News Agency.

In line with the downbeat performance, sales of premium phones accounted for only 80 percent of the 10 most popular smartphones, down 16 percent from three years ago, since the regulation went into effect, Digieco said in June.

Budget phones, however, are doing better than ever. Sales of devices priced below 379,500 won increased to 18 percent of the best-selling devices this year, from 10 percent in 2013, Digieco said.

Market analysts warn that the decreasing appeal of premium phones will drag down the revenue of local tech giants Samsung Electronics and LG Electronics.

“High-end phones are not as attractive as before because the amount of money that consumers actually pay has increased,” said Zhang Jung-hyouk, vice president of Atlas Research & Consulting, a smartphone market tracker.

But not all premium smartphones are suffering. Apple significantly increased its market share in Korea with its latest iPhone 6 series.

Putting aside advanced features and larger screens, some analysts believe that the government’s move worked in Apple’s favor.

Before the regulation, telecom companies tended to be more stringent in giving subsidies for iPhones, apparently because of contract terms with Apple. The disparity in subsidies made flagship phones by Samsung Electronics and LG Electronics much cheaper, even though the retail prices are on par with the iPhone models.

As the regulation largely evened out subsidies, there was no price gap between premium phones by the three major smartphone makers, which consequently increased the appeal of iPhones.

Samsung Electronics’ market share, on the other hand, stood at 46 percent, although the company usually held a majority on its home turf.

LG Electronics fared worse, with 14 percent of the market.

The company petitioned the Ministry of Science, ICT and Future Planning and Korea Communications Commission on Wednesday, explaining what it sees as negative side effects of the regulation.

The Science Ministry responded that overall demand for smartphones has decreased, which affected the premium market.