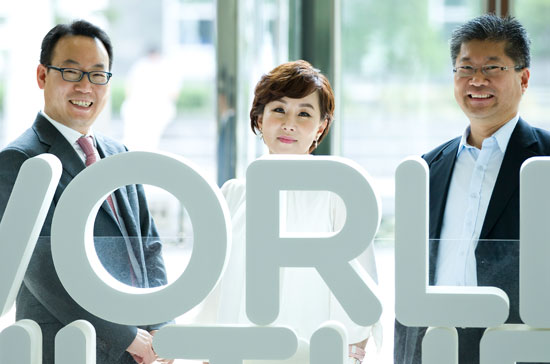 There are a multitude of fluent nonnative English speakers in Korea, though few are verbose in the kind of everyday English spoken in Western countries.

So it’s understandable that no matter how much Koreans learn and practice, their words likely won’t flow as easily once they step foot in America.

At least, this is the opinion of YongSang Kim, 43, a lawyer at major U.S. law firm Arnold and Porter LLP, who recently co-wrote a book on everyday English expressions and phrases, “Everyday American English.”

“When I was in school, I found English class absolutely terrifying,” said Kim, who now speaks English as fluently as a native speaker. “Once during class, when the teacher asked me to read aloud from an English book, I couldn’t read a single passage correctly.”

Humiliated by the incident, he begged his parents to buy him English tapes. He listened to the tapes, memorized his entire textbook and finally seemed prepared to study abroad in the United States. But unfortunately, when he arrived, he came across a different sort of English than what he had learned from his tapes.

“The commonplace, everyday English expressions I heard were nowhere to be found in our [Korean] textbooks,” Kim said.

So he wrote down the English expressions and phrases he picked up and compiled them into a book, “North American English Used a Million Times Per Second,” which he published in 2001.

“I tried to include English expressions that couldn’t be found in other books on English as much as possible,” he said. However, the book failed to attract enough interest and was put out of print.

Then, another opportunity presented itself.

Kim Yeong-tae, 48, who works for the Ministry of Land, Infrastructure and Transport, was dispatched to the Korean Embassy in Washington, where he visited YongSang Kim, a colleague from college, and came across a copy of YongSang Kim’s first book.

“Being posted in America came with the stress of [speaking] English. It was always a problem for me, but YongSang Kim’s book was eye-opening,” Kim Young-tae said.

Kim Yeong-tae, who reported for an English-language newspaper in college and even joined an amateur baseball team to master the language, convinced YongSang Kim to write another book.

And Kim Tae-yeon, 46, an English lecturer for state-run, educational television channel EBS, added the finishing touches to the publication.

“From the perspective of an English lecturer, I was so surprised to find how rich the [everyday English] material was,” the lecturer said.

So with the contributions of a lawyer, a public servant and an English teacher, “Everyday American English” was published.

The three Koreans also offered some tips on how to successfully master English. Kim Yeong-tae said he believes that without a true interest in U.S. culture, one can never completely learn English, while YongSang Kim added that memorization was a basic requirement. Kim Tae-yeon, however, offered a more practical tip, suggesting that students envision a situation and practice what they would say in English if they were confronted with it.